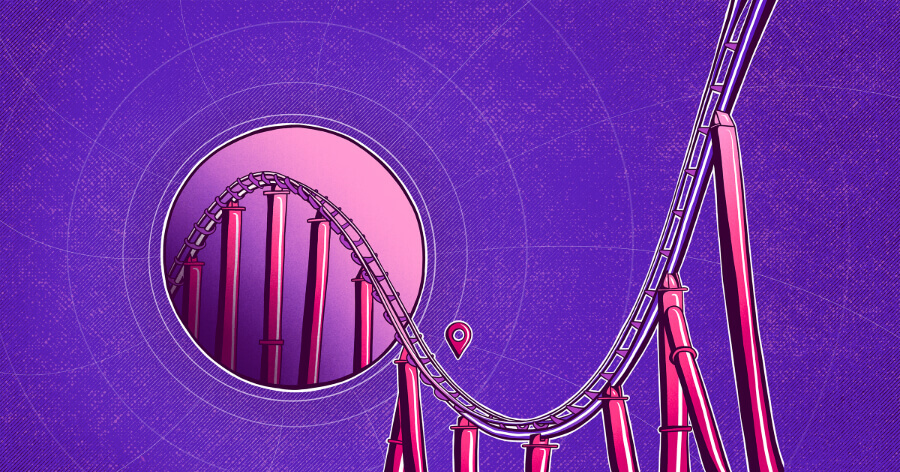 Market volatility is a measure of how much the prices of an asset or index vary over time. Less formally, it refers to a period of uncertain, rapidly changing market conditions.

Rather than a smooth trend of sustained growth or decline, volatile markets go up and down with dizzying speed. Basically, if the price graph looks like an erratic heartbeat, then we’re likely in a volatile stock market.

It’s not the same thing as a bear market (a period of declining prices and low investor confidence), but it can often lead to or coincide with one.

It can happen for a few reasons, including:

When markets are volatile, investors tend to react in a few ways.

Some investors ignore the day-to-day turbulence and just continue to hold their investments.

Historically, over a long enough time horizon, the impact of volatility can be evened out by a buy and hold investment strategy.

Consider those unlucky enough to buy the S&P 500 at the 2007 market peak just before the financial crisis.

These ‘chumps’ would still have seen their money doubled if they ignored the crash and just held on for ten years.

These investors may also believe time in the market beats timing the market.

Quite a few studies have shown scenarios where missing the 10 best performing days of the stock market over 20 years drastically reduces total gains.

So from that point of view, unless you can predict those 10 days, your best chance to hit them is to spend as much time in the market as you can.

This approach also reflects the idea that losses (and indeed gains) only materialise when you sell investments. So selling in a time of turbulent or declining markets may mean selling at a discount.

This is the more aggressive counterpart to just holding on to your investments. Some investors instead see volatile or jumpy markets as prime buying opportunities.

We can sum this up with an obligatory Warren Buffett quote:

Thanks, Warren! Why is this?

Volatility can mean that high-quality companies have dropped to a discount price because of reactive or panicky selling. So some investors look at volatile markets as a time to buy that quality at bargain prices.

We’re not going to recount the full story but the idea is to imagine that you co-own a business with a ‘Mr Market’ who based on his mood, offers to buy your share or sell his at constantly changing prices.

A smart owner will sell when Mr Market’s feeling positive and buy when he’s depressed. 👌

In other words, the market’s emotions and opinions change daily, but investments still fundamentally represent ownership in the same businesses.

A combination of both approaches. Cost averaging means that an investor buys into his favoured investments in small amounts over time. If you want to do this, it’s helpful if your commissions are zero. 😉

This means they avoid buying at any particularly bad point and average out their overall cost. This means the psychological benefit of cost averaging during volatile periods can be very valuable.

In volatile markets, cost averaging helps investors to potentially create some stability in their own performance. Of course, if the market starts to go up consistently, it can mean buying at a higher cost over time.

Finally, some investors prefer to get some shelter from the fast-moving equity market and focus on traditionally less volatile asset classes, like:

Money market funds, like the ultrashort bond fund in the app, are funds that track an index of short maturity debt issued by large institutions, companies or governments.

Since the maturity date is so close, the risk of non-payment or a price change is seen as extremely low. If the UK government borrows £10m today, it’ll almost certainly pay it back tomorrow — with barely any interest.

So an investment in a money market fund is often seen as very close to holding cash. It likely won’t drop and it probably won’t rise much.

Some money market investors also choose funds that are denominated in historically strong currencies like the Japanese Yen or US dollar so they’re not just holding any cash equivalent, they’re holding a very secure one. We’re adding a $ Ultrashort fund very soon.

UK investors looking to diversify from the pound in the wake of Brexit can use these funds to gain exposure to other currencies.

Government bonds are another huge safe haven: specifically bonds issued by governments with strong credit ratings, like the UK or US.

Last but not least, there are precious metals: gold, silver, platinum and anything else shiny and expensive.

The prices of precious metals can actually be quite volatile themselves but they don’t tend to track stocks, so they’re seen as a safe bet when markets are unpredictable.

How does a stock exchange really work?