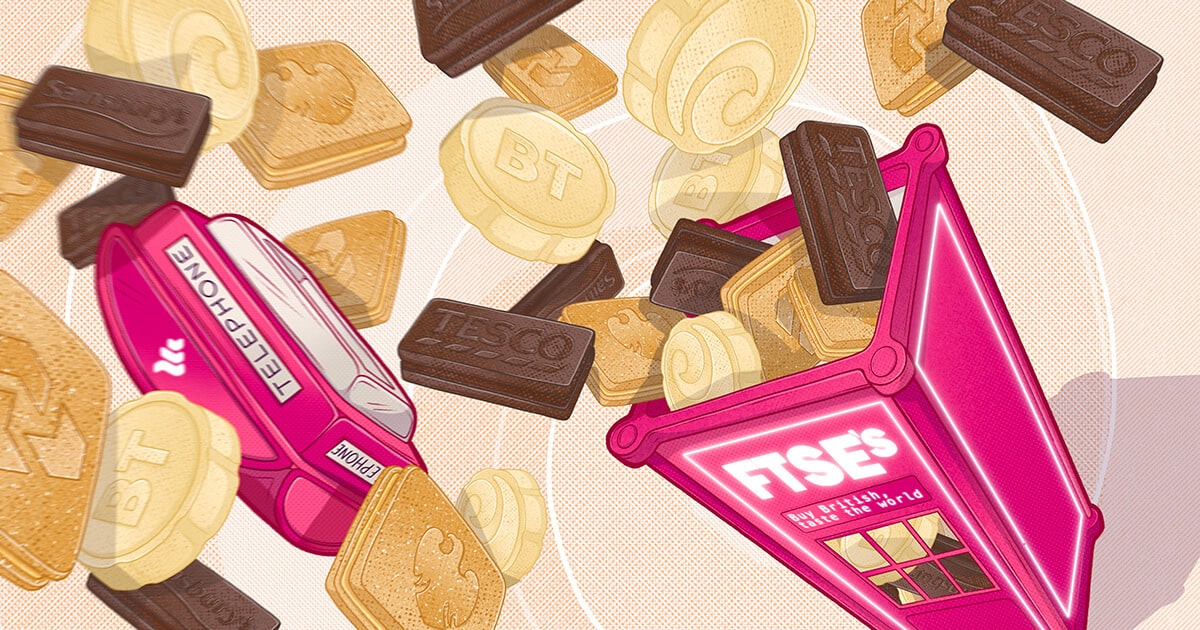 One index is seeing record highs but does that mean you should invest?

If you see a news update about the UK economy, the odds are you’ll hear someone reference the performance of the UK's biggest companies.

The blue chip index, composed of the 100 biggest publicly listed companies in the UK, is seen as the best litmus test for how the country’s stock market is performing.

But this can end up being misleading. Those mammoth firms may trade on the London Stock Exchange but most of their business is outside of the UK.

In fact, only about 23% of company revenues among the biggest 100 UK stocks are derived from the country they’re listed in. So even if it’s a good way of gauging the health of the UK’s equities markets, investing in the largest stocks is not necessarily a great way of getting exposure to the local economy.

Contrast that with the mid cap names and you get a bit of a different story.

Companies in the index, which contains the next 250 largest listed firms in the UK after the top 100, get 41% of their revenues from within the country. And historically that figure has hovered around the 60% mark.

This may explain why the index has performed comparatively well in the past six months.

Unlike the big bruisers, the mid cap bourse has now recovered from last year’s covid-induced crash and is trading at record highs.

The double whammy of Brexit uncertainty and the coronavirus meant there has been a huge amount of gloom surrounding UK stocks, even prior to the pandemic.

But with an EU deal in place and a return to normal life on the horizon, investors are starting to find the UK economy a bit more attractive again.

Despite this growing interest, stocks listed here are still trading at much lower valuations than they are in most other major economies — at least on a price to earnings basis.

By comparison, US stocks averaged 22.7 and Japanese stocks 17.2.

Shares in companies listed in the EU’s Economic and Monetary Union were a tad higher than the Japanese ones, with an average forward P/E ratio of 17.8.

You can take this in a couple of ways.

So those numbers could mean people don’t have a lot of faith in the growth potential of UK companies.

On the other hand, lower P/E ratios are often a sign that investors have unfairly neglected a certain market or company.

As an extreme example of this, the founder of Amtelon Capital, an asset manager that invests in Iranian stocks, said he started the fund after he saw stocks trading with P/E ratios of 4 or 5. The Iranian stock market went on to be one of the best performing in the entire world not long afterwards.

Somewhere in the middle

The UK is obviously not Iran. Luckily we’re not under US sanctions here and we aren’t ruled by a fairly autocratic government.

But the reason Amtelon was able to do so well there was because investors tarnished Iran’s whole market with the same brush. Things are bad there, most of them seem to have thought, so its stocks must be bad too.

A similar train of thought has been guiding lots of investors with regard to the UK over the past few years.

Even though many big UK firms have practically no exposure to the UK economy, people haven’t been buying them because they still see the index’s performance as being tied to the local economy.

Having said that, we have to admit that some of the long-term prospects of the UK’s blue chip firms aren’t looking great.

Conversely, energy companies like BP and Shell make up around 15% of the UK 100. Tobacco companies BAT and Imperial Brands also have a close to 5% weighting in the index.

Looking at those stats, it’s easy to see both sides of the coin. Investors may be undervaluing UK firms but a lot of its major constituents also don’t look likely to provide the sort of exciting growth we’ve seen in US tech stocks over the past two decades.

The mid cap arena is a little better in this regard.

Tech stocks make up just over 3% of the index and consumer staple and discretionary goods, which have both seen some good growth over the past decade, comprise about 25% of it.

This may explain why the index has managed to outperform the big leagues by some margin over the past few years.

Of course, a big part of those gains have also come recently and could be due to greater enthusiasm about the UK economy.

For now that could make sense but then the UK economy may also not turn out to perform as well as people are expecting it to. At the same time, the global economy could recover faster than people think it will and give more of a boost to bigger firms.

In short, there are pros and cons to both indices. Investing in something like an ETF that tracks either index is a simple way to get exposure to them. But just be aware of the differences between the two — and what the future holds for them — before you do.