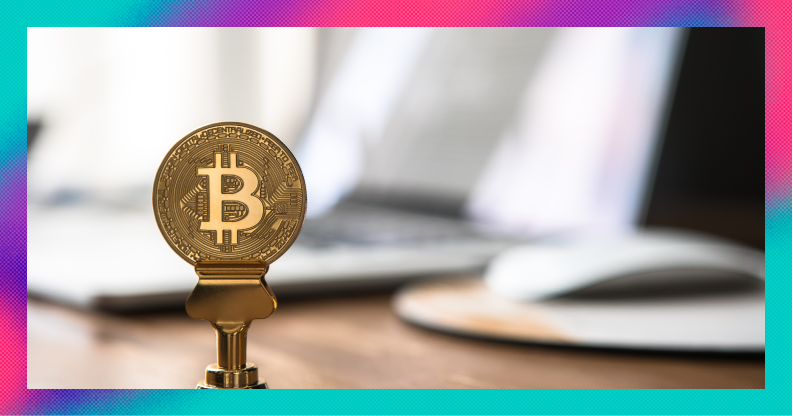 Alternative currencies, and the volatility they’re known for, are back in vogue.

The crypto narrative has been moving at lightning pace over the past few weeks and months. It’s easy to get sucked into all the short-termism but we should allow ourselves a second to take a step back and widen the frame a bit.

The fact that there was as much enthusiasm as outright derision from the investment establishment pointed to a world that didn’t really understand cryptocurrencies and got too excited or too sceptical.

It didn’t help that JP Morgan chief exec Jamie Dimon flip-flapped between calling the whole thing a ‘fraud’ and then seemingly coming round to the idea of the blockchain.

Maybe we just needed time to reflect on it all. The sector’s time in the wilderness since 2017 gave us just that.

So, with even higher highs this time around and even more attention given to this week’s sell-off, what’s changed and is there now a place for the crypto industry among our more traditional ISA assets?

There are a lot of fans and detractors just waiting to hit the ‘told you so’ button but whether you become a crypto ISA millionaire or not will be a result of more than blind derision or hysteria.

Are cryptos currencies or assets?

Bitcoin and its band of altcoins are still going through a bit of an identity crisis.

Confusingly, crypto fans lie on a spectrum of wanting to disrupt money as we know it at one end, to taking a punt in the sector with their life savings at the other.

If you remember the end of 2017, you’ll recall a lot of the reticence among the sceptics was based on this balance being ill-defined and the asset being used for speculation, not as its initial purpose.

Four years on, we’re still treating it as a speculative asset. Die-hard fans can talk about the decentralised revolution all they want but when memecoins like Doge start to play a meaningful part in portfolios across the world, any eventual use case for crypto is overshadowed by outright lust.

In times of geopolitical uncertainty, and when other assets seemingly carry too much short-term risk, gold has traditionally been the ‘safe haven’ investors flock to.

Renewed virus fears, a looming US election and ongoing Brexit negotiations (remember them?) meant we saw a huge spike in demand for the yellow metal last summer.

The dollar is traditionally the go-to for worried currency investors but, with the US part of that concern, many have turned to the country-less crypto alternatives.

The decentralised nature of systems like Bitcoin can start to seem attractive if you don’t like the look of what the world’s central banks are doing.

This use of crypto as a store of value means it’s more akin to a commodity now, as opposed to almost being treated like a speculative equity in 2017. But that’s the big question - can it really be a store of value if it can sell-off hugely in one day?

Is Bitcoin the new gold?

There are a few issues with putting it in the same bracket as gold and the precious metal universe. The first is that we’re still figuring out the use of crypto on a global scale.

It might be a way to alleviate currency concerns in developing nations. But it might just as easily facilitate an ever bigger black market than it already does.

And that’s if we even treat it as a currency, which we aren’t doing at the moment.

At the very least, gold has significant commercial and industrial uses which give it a purpose if it loses its commodity shine.

We could talk more about the volatility, lack of liquidity and how difficult it is to value the likes of Bitcoin but the Financial Conduct Authority (FCA) put it much more succinctly: investors should be prepared to “lose all their money” they put into a crypto strategy.

The regulator also warned that some crypto firms may be bending the truth when it comes to laying out the risk-reward ratio on offer.

How to invest in the blockchain

The FCA is right to call out the intrinsic risks. That’s to be expected.

And a quick look at some of the recent crypto mining posterchildren shows just how important that risk messaging is.

So far, the crypto industry has offered ‘all or nothing’ frenzies. If we’re to get a viable currency out of the movement like was first intended, we’re going to have to manage this high octane side.

One difference this time round has been the attention given to the miners like Riot and Argo Blockchain.

UK-based Argo offers a global data centre which allows consumers around the world to mine cryptocurrencies for a monthly fee.

Cast your mind back to the images of the gigantic warehouses needed to generate crypto a few years ago. This mining-as-a-service model shows that even the innovators can be innovated.

There are still environmental concerns over the miners’ energy usage though. The counter to this is often that there’s more renewable energy being used than many of us realise but the worry, and Elon Musk tweeting about it, has been enough to throw a spanner in the works.

The likes of Riot and Online Blockchain have seen a spike in interest over the past year too.

One reason could well be that investors are looking for listed exposure to the theme without having to sort out wallets themselves. Many investors had exposure to crypto through the balance sheets of popular holdings like Tesla but the ecosystem of crypto-adjacent listed firms is growing.

The much anticipated Coinbase listing is probably the biggest demonstration of second-order plays coming to market.

While demand for ways to get crypto into traditional ISA portfolios exists and the dearth of pureplay ways for investors to access the asset class on main exchanges continues, they might have an advantage.

Is cryptocurrency a good ISA diversifier?

The jury’s still out.

But is it an alternative to gold? No. Not yet anyway.

We’re one big drop away from forgetting it again for a few years. But then there are patterns like the dot.com boom which was misguided in a lot of cases but, as a movement, was just too early.

Legitimacy is a big issue for many investors, as well as evidence of long-term viability at its core function. Certain altcoins with a compliance-first attitude like remittance-focused Telcoin could be a sign of things to come. Rather than fight regulation, the future of the sector might be determined by which use cases of the blockchain work with regulators and get them onside.

But if crypto exists purely to be a speculative asset, and attracts interest where risk is often unmeasured and loose, it’ll fail to garner support from the mainstream.

The more big companies and investment trusts like the Ruffer Investment Company start to dip their toe in the water though, the more it will be legitimised as a speculative diversification tool.

For the everyday ISA investor, the takeaway should be that the sector has a history of disappearing as quickly as it came into town, and the FCA still isn’t convinced.

It may eventually become a mainstay of investing, in which case, early adopters in the miners could still be rewarded in the long term.

If you are planning to add a bit of blockchain to your portfolio just make sure you bring a good amount of risk management (and a super long-term time horizon) with you.

Look before you leap.

SIPP vs ISA: this time it's personal (finance)

How to find the best stocks and shares ISA