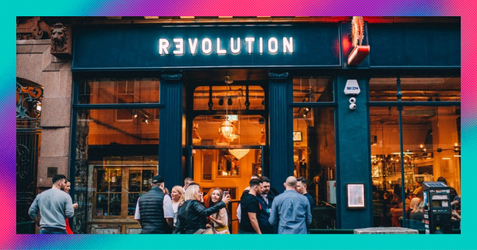 UK shares gearing up for 19 July.

Ah, June 21st. The long-anticipated Freedom Day, which was set to release the UK out of its fourth stage of lockdown.

Last week’s announcement that a full reopening would be pushed out to July 19th was a blow to many.

The bulk of the sighs came from businesses eager to get back to pulling in consumers and making up for lost time over the past year and a bit. Here are five stocks typifying that theme, whose bosses and investors alike will be counting down every second over the next four weeks.

We’re highlighting these stocks as an illustration of the wider reopening theme, they aren’t recommendations to buy or sell any security and shouldn’t be taken as such. If you’re thinking of investing in UK and US shares, check out our guide on how to invest in stocks or have a chat with a qualified financial adviser if you need to.

Picture this: the long-awaited Freedom Day has finally arrived.

Groups of any size are allowed, and nightclubs are back in full swing.

But if all that feels just a smidge too overwhelming, why not ease your way out of lockdown by trapping yourself in another room? ‍

While share price has tumbled a fair bit since its initial IPO, the past six months have seen some pretty substantial growth.

Group revenue was down 46% last year, sitting at £2.7m. But that’s pretty on par with expectations, given the group lost 45% of open days from Covid restrictions.

£230k of that came from digital initiatives attempting to bring escape rooms into the home.

Turns out those weren’t quite as popular. Understandably, trying to escape your home when you’re actually confined in it just doesn’t drum up the same appeal.

At least that proves Escape Hunt’s bread and butter is their physical sites and shows management’s agility in getting a new proposition off the ground in a tough spot.

And that’s good news considering they’ve been rolling out more locations, with 17 currently spanning the UK and two more opening up shop soon.

It’s also on the hunt for more international properties and has bought out its Middle East, French and Belgian franchises.

Corporate parties are a big revenue stream for Escape Hunt. They’ll be a major saving grace as working from home shifts back into the office.

The ONS estimates 6.1% of Britons switched jobs in the first half of 2020 alone, so you can bet there’s a growing backlog of awkward icebreaker events waiting to happen.

Now that you’ve managed your great escape, you definitely deserve a celebratory drink.

Why not give one of Revolution’s bars a whirl?

The UK bar group was founded in 1991 and has since developed a pretty vast portfolio.

Back in April, when outdoor dining once again became possible, the group actually showed some pretty impressive numbers.

The 25 bars able to operate delivered 48% of the revenue generated back in April 2019.

Considering those venues were operating at 15% of their potential capacity, and shorter hours than usual, that’s nothing to scoff at.

Unfortunately, the big picture isn’t all too pretty.

Revolution’s been operating at a loss since 2018, and Stockopedia reported return on capital employed (ROCE) tumbling from -9.03 in 2019 to -37.4 by 2020. The measure gives an idea of how well the money pumped back into the business is doing in generating even bigger profits. A negative reading tells us that new money being put to work is actually becoming a drag on profits. Maybe not surprising given the past year but a bit more concerning as it started before the pandemic.

Clearly, this is an extreme value stock.

Plus, with pub reservations filling up weeks in advance, Revolution might be able to naturally benefit from major market demand for a boozy night out.

Time to burst those bubbles. The days of rubbing up against hundreds of sweaty bodies are back (nearly).

Live Nation is a huge entertainment company managing concerts, sponsorship and advertising. It also owns Ticketmaster.com, one of the top five websites in the world in terms of visitor numbers, boasting 27m monthly viewers.

Performance has been steady before the pandemic hit, and it has more than recovered since last year’s lows. That’s likely because concerts are starting to return to normal in the US.

Valuation multiples for the firm have been in their boots (it’s hard to get a price-to-earnings ratio if there are basically no earnings). But there are broad expectations of a swing back into the black if mass gatherings become normal again.

Given the low base valuations it’s starting at, there could be upside potential here. Investors do need to keep in mind though that a return to positive revenue isn’t the end of the tale. A lot of firms have been hanging on for dear life and the pandemic may leave some scarring on the balance sheet or debt pile.

But, with double the number of concerts from 2019 in the pipeline for 2022, and its festivals selling out in record-breaking time, Live Nation’s warming up to put on a good show.

And as its artist management and sponsorship revenues continue to grow, its supporting acts will only continue to uphold its growth.

Time to soothe those fried vocal cords. It’s the first time you’ve sung your heart out in a while, and a piping hot bowl of Wagmama ramen should do the trick.

The Restaurant Group (TRG) has you covered.

TRG’s portfolio is 20% pubs, 33% leisure restaurants (including Garfunkel’s and Frankie & Benny’s), 9% concessions (in airports), and the remaining 38% is made up of its Wagmama locations.

Suffice it to say, TRG’s had a pretty rough year. That’s a bummer, considering they seem to be doing a lot of things right.

It’s exited 60% of leases deemed no longer worthwhile and walked away from 50% of its concessions sites. In trimming the fat on the fleet, it’s cut real estate liabilities to £480m, down 40%.

To-go orders at its leisure restaurants were up 5x, and Wagamama orders grew 2.5x in February of this year versus last.

But those restaurants were showing small baseline figures to begin with. We’re talking appetiser-sized returns.

The casual-dining space was struggling before Covid, and with delivery behemoths like Just Eat and Deliveroo blowing up throughout the pandemic, a complete comeback is not a sure thing.

And assuming international travel resumes in the coming months, its airport concessions will naturally see a revenue lift-off.

Speaking of travel, there’s hope that by July, a few more countries will be added to the UK’s meagre green destination list.

Stock Spirits is a UK listed small-cap, selling a variety of branded vodka and spirits across countries including Poland, the Czech Republic and Italy.

Although you can’t buy their spirits locally, if you could hop on a plane to get your hands on some, why not?

Historically, 15% of revenues came from restaurants and bars. But when lockdowns hit, the company pulled off some good momentum in off the shelf sales.

Growth was so good in that segment that the firm actually increased total sales volumes by 2% for the 6 months to March 2021 versus the same time last year.

Stock Spirits even reported a 91.6% increase in profit for the period plagued by Covid. Now that’s enough to boost investor spirits.

What stocks do you think will get a boost from the UK's July 19 reopening? Let us know on the Freetrade community forum.

Lithium stocks to consider in 2022