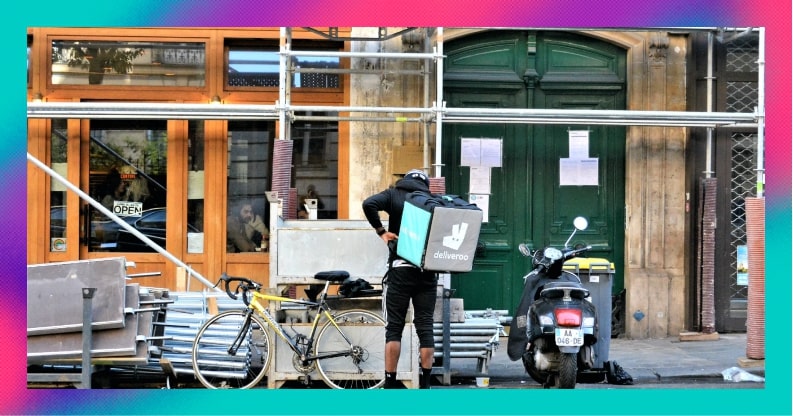 Just Eat Takeaway faces some wild years ahead as the battle for takeout king intensifies.

One of the defining features of the internet era has been companies running loss-making businesses for years as they seek to turn a profit.

Amazon is probably the most famous example of this. The book-selling, movie-streaming, parcel delivery giant was in business for 14 years before its balance sheet was in the black.

The problem is that for every Amazon, there are going to be thousands of duds.

This naturally leads to questions as to whether or not a firm will actually end up being profitable. And nowhere is this more apparent than in the food delivery sector.

Seeing the steady stream of turquoise Deliveroo bags gliding through the UK’s city streets, it would be easy to assume that the takeout business is a big money-maker.

In reality, Uber Eats and Deliveroo have never turned a profit and many have doubts that they ever will.

Uber Eats, for example, lost $254m in the second quarter of its 2020 fiscal year, even after adjusting for what were probably other substantial losses.

It’s also worth remembering that this was during lockdown, meaning the conditions were pretty much ideal for the business to thrive.

What’s also interesting about these nascent delivery businesses is that they were attempting to ‘disrupt’ an industry that had already been digitised to a large extent.

Just Eat Takeaway (JET) is not exactly a dinosaur company. But its business model differs quite substantially from the likes of Deliveroo.

The group, which was formed last year through the merger of Dutch firm Takeaway.com and Just Eat, simply connects hungry people with local restaurants.

This has proved to be a profitable business model over the past couple of decades. JET released a trading update on Wednesday that suggests its operating profit for the year will be about 10% of revenues.

The problem for the group is that businesses like Uber Eats are eating into their profits — and their margins are already pretty slim.

If he’s right, that leaves him in rather a strange position.

It means his company is having to battle against a bunch of firms that, even as they take away business from JET, are never actually going to make money.

So the takeout group is effectively in a struggle to keep its own operations afloat and profitable as it waits for those other firms to realise they’re wasting their time and money by burning through millions of pounds in venture capital funding.

Of course, this is only if you assume that food deliveries will never be profitable.

But Deliveroo may have finally cracked things, with company CEO Will Shu saying that the firm made an operating profit in the second half of 2020.

And for all Groen’s bluster, JET is also moving into the delivery market. It has already started hiring drivers and those takeouts generate around 5% of company revenues.

All of this suggests that what we’re likely to see in the years ahead is an ongoing struggle to dominate the delivery market, both here in the UK and abroad.

JET has set itself up for this via acquisitions. The company is itself the merger of two firms but it has also acquired Grubhub in the US, as well as numerous smaller firms in countries like Israel, Germany and Canada.

With those deals in place, the firm has also ramped up its sales and marketing efforts. This will be apparent to anyone that has seen its rather weird Snoop Dogg ad on TV but the group has also doubled its sales team headcount in the UK.

Deliveroo meanwhile looks set to continue as before. It’s going to keep burning through large piles of cash until it can become profitable.

The company is likely to hold its IPO this year and will be using those proceeds to try and dominate the markets it’s active in.

That will also be true of Uber Eats and pretty much any other ‘start-up’ business that is trying to take a chunk of the global takeout business.

What does this mean for investors?

There are some mental obstacles that anyone looking to put money into the delivery business will have to overcome.

On the one hand, you have JET, which has historically been profitable but which is going to face big competition from newcomers to the sector as it tries to expand.

The problem is that those newcomers are really unproven.

We are yet to see the evidence that a pure-play takeaway delivery business can actually make sustainable profits.

That makes it easy to be skeptical about investing in Deliveroo’s IPO or buying shares in DoorDash, which now has a $60bn market cap.

Then there’s the pandemic, which has totally skewed demand for delivery services.

It’s seriously hard to imagine us buying so much takeout food when we can eat out again.

That makes it tricky to gauge what is really going on in the sector and whether the revenue and growth figures we’re seeing are viable long-term.

JET shareholders will probably be hoping that the Groen’s predictions about the impossibility of profit-making in the delivery business come true. If they don’t then there will be trouble ahead for the Anglo-Dutch group.

Let us know what you think about Just Eat on the community forum:

5 uranium stocks and how to invest in them

Crypto stocks and how to invest in them