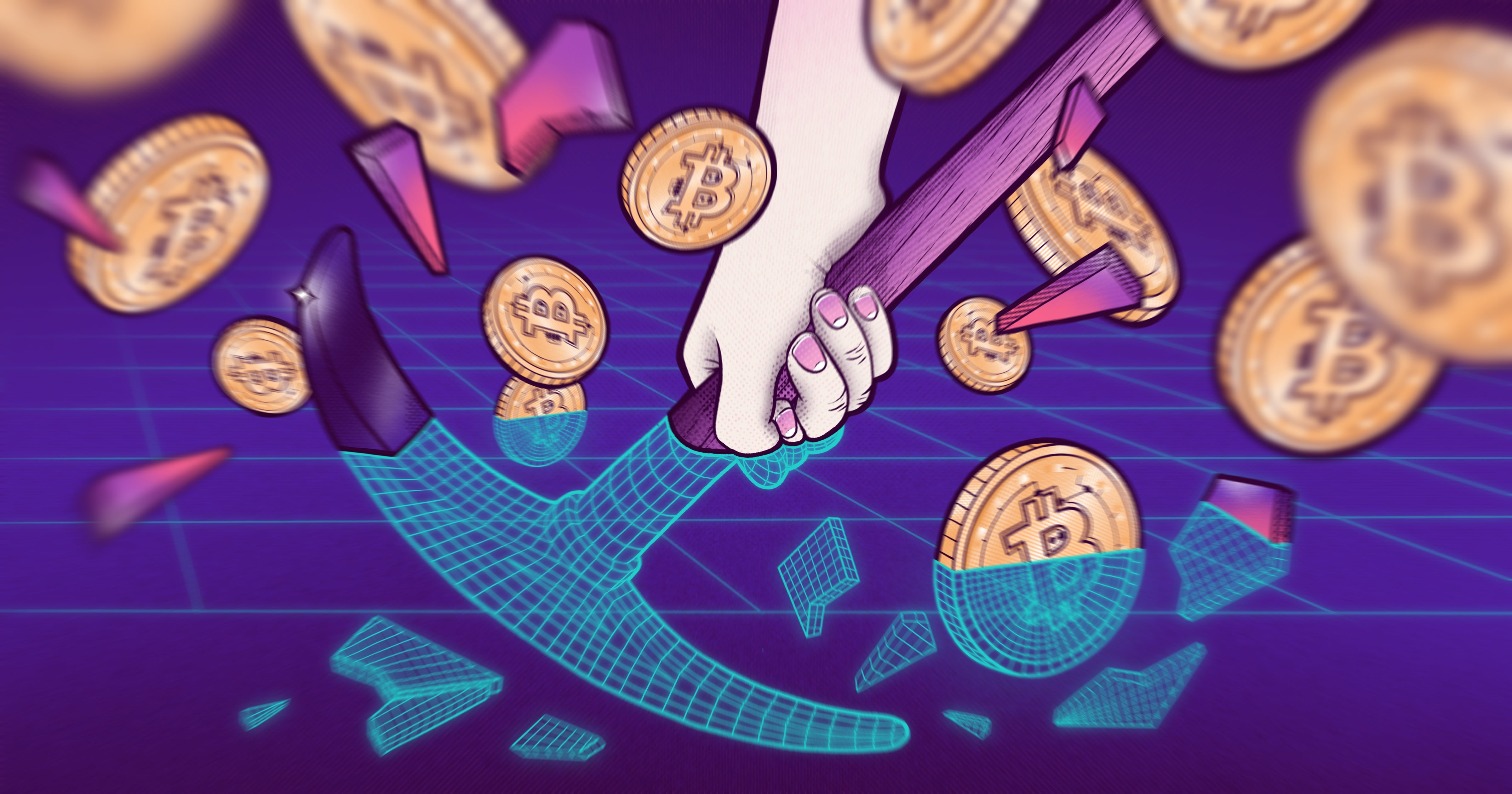 We take a look at the wild world of crypto mining.

Imagine taking some guy from the 1920s through a refrigerated room filled to the brim with graphics processing units.

Naturally the 1920s guy would think you were a total lunatic. Such is the strange world of cryptocurrency mining.

That means we don’t think so much about the infrastructure that supports all of the transactions which make those market movements possible.

But just as Visa, Mastercard and Stripe help facilitate the flow of cash between people and companies, crypto miners let people make transactions in bitcoin, ethereum and other cryptocurrencies.

Not quite cash, not quite a commodity

The big difference between those two sets of companies is crypto miners don’t just facilitate transactions, they also create the currencies themselves. Hence the name ‘miners’.

This illustrates why crypto, for all the blather and hype, is actually quite an interesting phenomenon.

We’ve had the same asset classes, like cash, commodities, stocks and so on, for a long time.

Cryptocurrency is a new one.

And the reason for that is it doesn’t fit into any other category. It’s kind of like a commodity in the same way gold is but it’s also a lot like a currency, in the same way the pound is.

The fact that you can’t really crowbar digital assets into either group shows why they’re their own thing, something which is pretty exciting, regardless of what you think of them.

What is crypto mining?

The only annoying thing about this nascent asset class is that so many of its fans tend to exaggerate or misinform.

To paraphrase Longshanks from Braveheart, the problem with crypto is crypto enthusiasts. They often make it hard to separate fact from fiction or to even understand how the market works.

This is particularly true for crypto mining.

To understand it, you need to know a little bit about blockchain. This is the technology that underpins cryptocurrency.

In really simple terms, a blockchain is like a digital data trail. That trail is made up of individual blocks of data that are all connected. So there are a bunch of data blocks all tied together. You know, like in a chain. A blockchain maybe?

Anyway, each block contains details of all the transactions ever carried out on a particular network. So if you go back through bitcoin’s blockchain, for example, you can find a register of all the bitcoin trades ever made.

And for bitcoin, a new block is generated every 10 minutes to validate all of the transactions that have taken place in that time frame.

The creation of those new blocks is what miners do.

They have to record all of the previous transactions that have taken place and convert them into hashes - numbers that act as a coded representation of each transaction.

But the blockchain is also set up in such a way that only one miner can generate any given block.

To be that one miner you have to generate a specific hash and, if you are fortunate enough to do so, the block you’ve created will be accepted into the chain.

This is why crypto farms have loads of GPUs and other computing equipment. Those devices spend all day producing randomly generated numbers over and over again in order to be the first to generate the block.

The reason they want to do this is that they are rewarded with a certain amount of bitcoin, or whatever cryptocurrency they happen to be mining, if they manage to be the first to generate the next block.

When bitcoin first started in 2009, mining was a relatively low-energy intensive business.

But today successfully mining one block can net you around £225,000. Not bad for 10 minutes of mining.

Such vast sums of money have brought big businesses to the fore, one of which is Argo Blockchain.

Shares in the company, which operates huge mining facilities in Canada and the US, have risen from 10p to over £2.60 in the past three months, with investors looking to take advantage of the rising bitcoin price.

The company itself is comparatively new, having only been set up in 2017.

But the mining group makes irregular currency exchanges for the bitcoin it mines, so most of those coins seem to have been sold at a price far below the current one.

Having said that, as of early February the company was sitting on 501 bitcoin but it’s also possible it has sold some in the meantime.

Argo is not the only publicly traded crypto miner. Riot Blockchain and Canaan Creative, which both trade on the US markets, are also listed.

In many ways, investing in these firms is a lot like buying into a gold mining company. Price increases in the metal will obviously be beneficial to miners but then they’ll also have individual nuances which affect their stock.

Similarly, bitcoin going up is going to benefit crypto miners. And then they’ll have their own unique problems — computer equipment that breaks down, for example.

The big difference is in the supply of bitcoin. At the moment, you get 6.25 bitcoin for every block you mine. And that figure halves approximately every four years. By the mid-2100s, there will be no new ones and any miners will be paid via transaction fees instead.

This finite supply is one of the key draws of bitcoin and one that crypto fans love to harp on about.

For miners it provides some guarantees because they know how many are left to mine. It also means there can’t be a sudden glut of supply that would kill the value of any bitcoin they mine.

But it also presents problems. That there is a finite volume of bitcoin set to be created doesn’t mean its value is going to continually go up. There have been wild swings in its price since its inception and that doesn’t look likely to change.

And unless it does, investing in miners is a lot like taking a very risky currency exchange bet.

Lots of electricity, lots of updates

Another big problem for miners, and arguably the wider world, is the insane amount of electricity they use.

The bitcoin blockchain is set up in such a way that the more miners there are, the more difficult it is to generate a new block. And the harder it is to do that, the more computing power — and energy — you need.

As it stands, bitcoin miners now use more energy than the whole of Argentina. Leaving aside the obvious implications this has for the environment, it also hurts you as an investor. If you have to pay massive operational costs then it eats into profits.

Then there’s the constant need for upgrades. Every industry requires regular revamps for their technology.

But the speed with which crypto miners’ assets lose value is pretty worrying. One of Argo’s most recent set of financial results shows that its mining equipment lost almost £3m in value during the first half of 2020 alone.

That was a huge amount, representing more than a quarter of the company’s revenue for the period. What investors would want to see is for those costs to remain constant or even go down as revenues rise. But that doesn’t seem to be happening.

Lastly, nearly all the big crypto miners are now buying up more and more computing power to get more bitcoin. The thing with doing this is that it guarantees that it will be harder to mine the digital asset.

This isn’t like gold where different mines hunt for the metal in different places. All bitcoin miners compete for the same bitcoin. This means it’s very easy to see the costs of mining going up but then there being no guarantee that the price of bitcoin will.

You could say that a lower price would mean more miners drop out because they find it a less attractive business to be involved in. But then the miners that remain will be competing for less valuable bitcoin, so it wouldn’t make such a difference.

All of this makes it hard to say whether bitcoin miners would make for a great investment. It’s an emerging technology and they clearly pay a big role in it, in the same way that Visa does for the payments industry.

But it’s also hard to see how the companies will escape the problems they face because of energy costs, the rapid depreciation of assets and bitcoin’s scarcity.

What would help is if bitcoin stayed at a high price consistently, which it has always failed to do.

Until that happens, crypto miners will remain, like the wider digital assets space, exciting and innovating but also very risky.