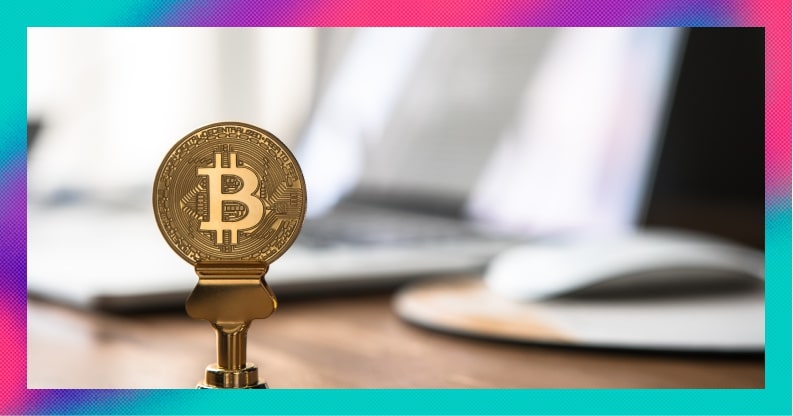 Crypto fans seem to think so.

The reason for this is the large sums of cash that central banks have been grinding out over the past year to stabilize economies in the wake of the pandemic.

Of course, a similar thing happened after the financial crisis just over a decade ago and there were people saying there would be massive inflation then too.

Ultimately it didn’t materialise and there’s a chance it may not this time. Plus many of the price increases we’re seeing at the moment seem to be a result of stretched supply chains and higher demand, not more money floating around the economy.

But it’s never easy to predict the future and it’s always worth preparing for the worst. Worrying about large sums of cash being printed doesn’t seem like a crazy thing to do either.

And one of the assets that’s now coming up a lot in conjunction with these fears is Bitcoin. The cryptocurrency, its advocates say, acts as a protective measure against fiat currencies that only decrease in value over time.

Before looking at whether or not that’s the case, it’s worth asking the question — what do we mean when we talk about a ‘hedge’ against inflation?

In a way, all investing is a hedge against inflation. You invest to make money and, if you want to at least break even, the value of your investments must increase at least as much as the rate of inflation.

Taken that way, you could argue Facebook stock has been a great hedge against inflation over the past decade because it has risen in value far more than the US dollar has devalued during the same period of time.

But this isn’t usually what we mean when we say we want to hedge against something.

Generally a hedge is an attempt to cover a potential loss by buying or selling another asset.

That would mean a hedge against inflation was more about investing in an asset with a price that correlates positively with the process. If inflation rises, the asset rises too and vice versa.

That brings us back to Bitcoin. Fans of the cryptocurrency have said since its inception that the digital currency provides a safe haven against the inflationary policies of governments and central banks.

As we’ve seen over the past 12 months, although we hardly needed proof of it, central banks are free to print lots of money if they so wish. As Bitcoin has a limited total supply, it’s impossible for someone to do the same with the cryptocurrency.

To say this means Bitcoin is a hedge against inflation is perhaps not completely sound logic.

It’s true that central bank policy does tend to devalue currencies over time but then scarcity doesn’t equate to value, meaning the limited supply of Bitcoin doesn’t say anything about how much it’s going to be worth in the future.

But the more interesting point for our purposes is that Bitcoin shows very little correlation with inflation. Based on Consumer Price Index numbers, inflation in the UK has risen by about 9.2% in the past five years.

During the same period of time Bitcoin has risen in price by 13,264%. So you would have beaten inflation but then the two pretty clearly don’t have much to do with each other.

How can you hedge against inflation?

To be fair to the crypto fans, it’s hard to find something that does act as a perfect hedge against inflation.

Commodity prices, for example, will have to rise in unison with inflation but then lots of other factors affect them too.

The same is true of the housing market.

Anyone selling their home will price in the impact inflation has had on its value but then supply and demand play a huge role here too, as the London housing market of the past three decades shows. Plus buying a house is a pricey thing to do and out of reach for a lot of people.

One alternative could be to invest in rental properties, particularly commercial real estate.

Research from asset management firm DWS Group published last month shows that, although they aren’t a perfect fit, commercial property returns have been quite a strong hedge against inflation for the past 50-odd years.

Obviously the average person can’t go out and buy an office block but there are plenty of UK-listed real estate investment trusts which you can buy shares in that specialise in commercial properties.

Another option is to buy inflation-linked bonds or an ETF that tracks them.

You still have to be very careful here though. The yields and prices these products offer can often mean you see returns that come in below inflation levels. They are also heavily influenced by interest rates, which can result in price fluctuations that lead to you losing money.

As all of this illustrates, it’s pretty tough to find something which you can invest in and have it provide an inflation-matching return.

This points to a wider truth about investing. A lot of the time we want to find something that will match exactly what we want and provide precisely what we need. Reality isn’t usually so kind.

That being the case, it may be that putting a heavy emphasis on inflation isn’t the wisest course of action.

If you were to go back a decade ago and look at that Facebook stock, the odds are inflation wouldn’t have been your biggest concern — even though many of today’s money printing fears were present then too.

Instead you’d want to see, among other things, if it had the ability to grow revenue, maintain strong operating margins and keep debt low. The result would have been a good investment and one that easily beat inflation.

Identifying similar companies today isn’t an easy task. But it doesn’t seem any worse an option than trying to predict inflation and attempting to find an asset that will rise in unison with it.