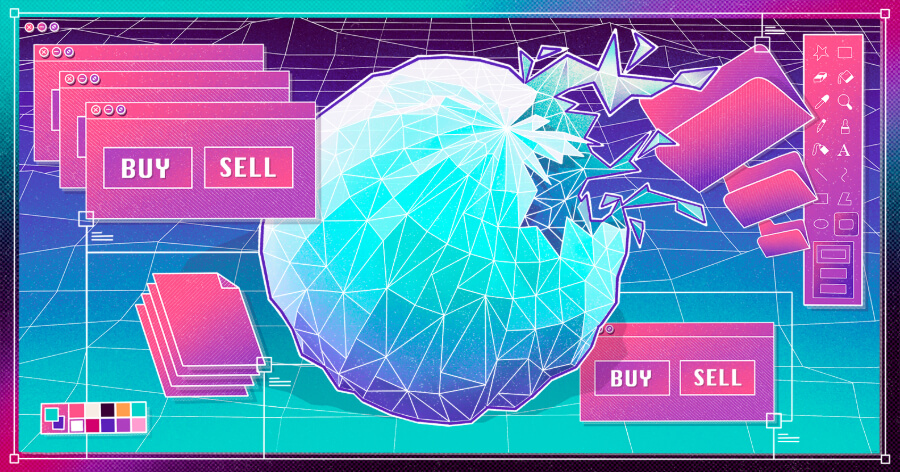 Shares in firms like Apple, Microsoft and Facebook have all dropped in the past couple of weeks

After months of defying the corona-induced economic crash, tech stocks have taken a major plunge over the past couple of weeks.

Tuesday saw shares in Apple fall by almost 7 per cent. Microsoft saw a smaller 5.4 per cent decline in its stock price on the same day.

Shares in the carmaker dropped 21 per cent in one day, wiping out $82 billion from its market valuation — equivalent to the entire GDP of Guatemala.

The market did recover slightly on the days that followed but the sell off has left some investors wondering if we are about to see the tech stock bubble burst.

To understand why people are feeling this angst, we need to look at why the sell-off happened in the first place.

As with most things in the stock market, there is no easy answer here and there were almost certainly multiple factors at play.

But one thing that really seems to have spooked investors into selling were revelations about what was driving the price of tech stocks upwards in the first place.

Media reports published at the end of last week indicate that SoftBank, a major Japanese investment firm, had been buying huge volumes of call options in individual tech stocks over the course of August.

Call options are contracts that give the buyer the right, but not the obligation, to buy an asset at a future date at a set price.

Speculators will buy call options if they think the price of an asset is going to increase.

There is a simple reason for this. If you can buy shares in a company at £50 when they are worth £100, you stand to make a lot of money.

Of course the reverse is also true and call options can lead to buyers losing huge sums of cash.


How did this affect the market this week?

For example, if you have a call option for shares in Tesla, those shares are not going to appear out of thin air. There has to be a company or person who has committed to sell them to you.

Taking on that role carries with it a huge amount of risk.

If you buy a call option in Tesla and shares in the carmaker go up, the person or company taking the other side of the trade stands to lose money.

To counteract this risk, companies dealing in options will normally hedge their positions in the underlying market by buying up stock.

So if you buy a call option in Tesla and the company on the other side of that trade thinks shares in the carmaker are going to keep going up, they’ll buy Tesla shares. That way, they protect themselves from the loss they would otherwise suffer on the call option.

Now, we hear you asking, what does this have to do with last week’s crash?

Well, SoftBank was buying a lot of call options — $30 billion worth to be precise.

That’s a huge amount of risk to take on and the firms that SoftBank was buying call options from decided to hedge in the underlying market.

In this instance that meant buying lots of tech stocks.

This wouldn’t have much of an impact if it was you or me buying the call options (unless you’re SoftBank’s CEO).

But when you are pumping billions of dollars into companies then you can move share prices, even in companies that have a large trading volume.

And this is what some investors and journalists believed took place with SoftBank.

They thought the company’s call options were driving huge sums of money into tech stocks and inflating prices. Investors’ response was to sell off, which pushed the prices of those assets down.

Not all of the declines last week were due to SoftBank's options buying.

Tesla, for example, saw its share price fall after it failed to get into the S&P 500 index. Overzealous retail investors have also been blamed for the rising prices of tech stocks.

But the SoftBank revelations may have prodded some investors into action. Many of them have been questioning how sustainable the rally in tech stocks really is and whether or not there is going to be a crash.

There is good reason for this.

With the exception of Tesla, almost all the tech firms that saw dips in their share price last week have seen some recovery, continuing a stream of growth that seems surreal in our pandemic hit world.

Shares in Apple, Microsoft, Alphabet and Facebook are still trading near record highs and at levels far exceeding their value following the stock market crash that took place in March.

It is understandable that investors have been putting money into these firms.

Companies like Amazon, Facebook and Microsoft have seen bumper profits as they have either been immune to, or even benefited from, the effects of COVID-19.

At the same time, people are fearful of rising inflation as governments across the world are pumping vast sums of money into their economies in order to stimulate growth.

There are other options on the table but, if you are afraid of inflation, there is a rationale for putting your money into stocks.

Having said this, the total separation between tech stocks’ performance and the economy is worrying.

US GDP declined by 34 per cent from March to June of this year and unemployment is now at approximately 8 per cent — more than double the level it was at prior to COVID-19 hitting.

Such stats make some investors question whether the mind-boggling value of tech companies is actually reflective of their true value or if it’s all just speculation.

Of course, a share is only worth what another investor is willing to pay for it.

But if more and more investors start to believe that their tech shares are overpriced then they may start to panic and sell off.

That could lead to more declines like we saw this week. Or it could even lead to the bursting of the much-feared tech stock bubble.