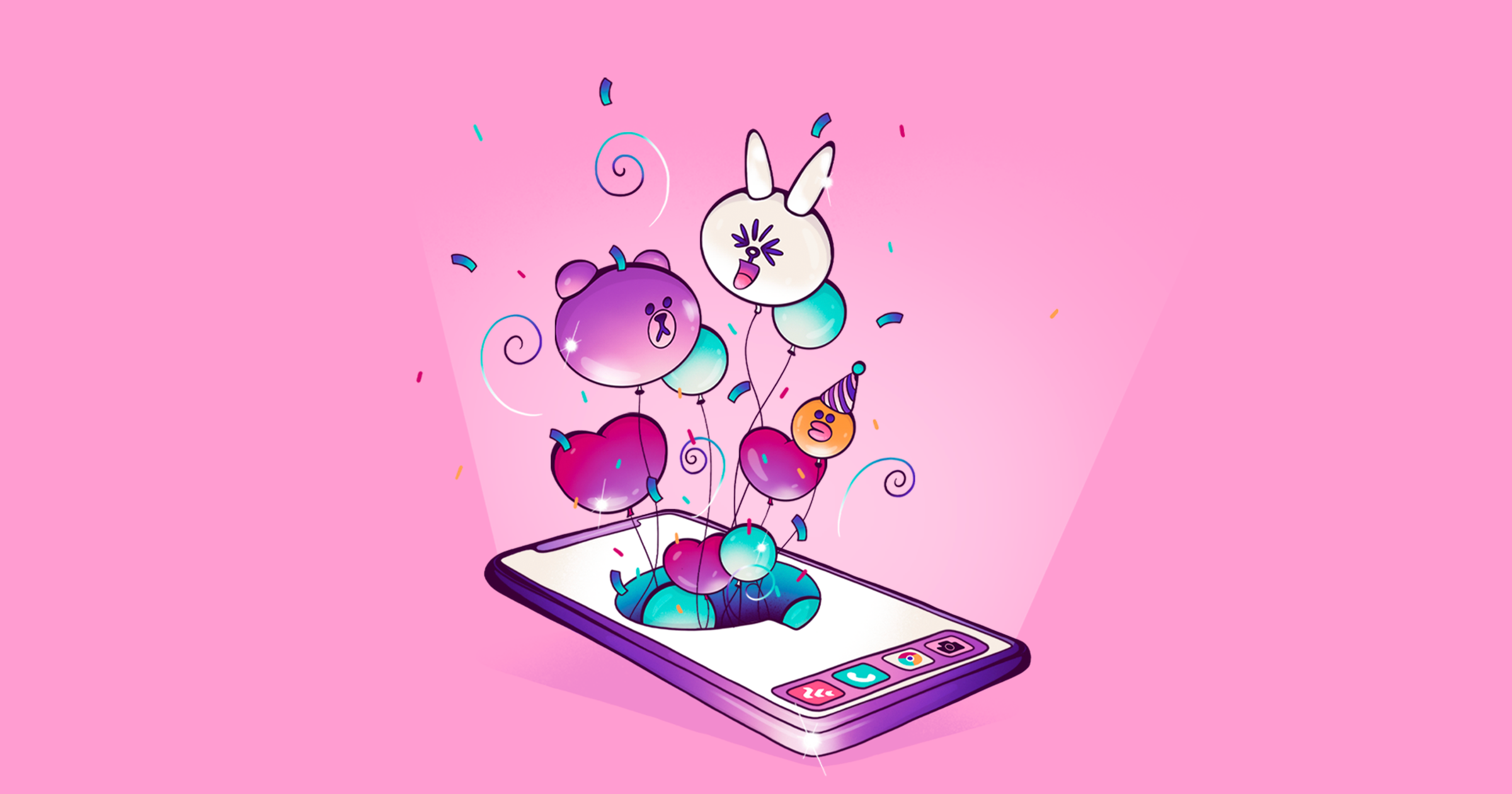 Users send over a billion stickers per day.

One of the major dividing lines in tech today is between apps that focus on providing one specific service and others that offer users a whole range of features.

Uber, for example, doesn’t just let you order a taxi. You can also use the app to order food or hire a bike.

In much of Europe and the US, single-purpose apps remain popular, though there are some signs that this is changing. Facebook’s plans to gradually integrate Instagram, WhatsApp and Messenger are a prime example of this.

In contrast, multi-purpose apps have been popular for years in much of Asia.

WeChat is probably the most famous example of this. The Chinese app has over a billion users and can be used to order a taxi, speak to friends or rent an apartment (amongst many other uses).

The LINE app itself is comparatively new, having been released to the public in 2012. But Naver Corporation, the tech firm’s parent company, has been active in Japan since 2000.

Naver is a South Korean internet company that’s similar to Google. It offers a wide range of products, including a web browser, blogging sites, translation services and video streaming services.

Things changed in 2011 when the Tohoku earthquake hit Japan.

With much of the country’s telecommunications infrastructure down, Naver employees built their own internal messaging application to stay in contact with one another.

They eventually decided to turn the software they’d developed into an app and, with that, Japan’s favourite instant messenger was born.
‍

LINE initially acted solely as a way for people to message one another — a bit like WhatsApp today.

Within a couple of years of its launch, however, new features started being added to the app.

The first major addition was a payments service — LINE Pay — that was introduced in 2014.

This lets you transfer money to friends and pay for goods online or in real life. You can also get a virtual Visa card and make deposits or withdrawals at ATMs.

‍
After adding that payments solution to the app, LINE followed up with a taxi-hailing service, conference calls and a news feed.

The company hasn’t slowed down either. In the past year, LINE users have been given access to a cryptocurrency exchange called BITMAX and an e-commerce platform.

Bizarrely, the most popular feature is probably the set of virtual stickers that users can send to one another.

LINE users send over a billion stickers per day and spent at least £60 million on them in the first three months of this year. Popular sticker characters have even spawned physical stores (see above), games and cartoons.
‍

LINE was downloaded 200 million times within two years of its launch and hit the 700 million mark in 2017. This has not translated into over 700 million users.

With much of the Western world still using WhatsApp or Facebook Messenger and WeChat predominant in China, LINE’s growth has largely been contained to Southeast Asia and Japan.

Still, Southeast Asia is a big place and LINE has at least 160 million users across Japan, Taiwan, Thailand and Indonesia.

In Japan, the app is used by 81 million people or 64 per cent of the country.

The stats are more remarkable for Taiwan, a country of 23 million people that has at least 21 million LINE users.
‍

There are two main avenues by which LINE makes money from its users.

The biggest chunk comes from advertising, which the company does across almost all of the services it offers. Another big part comes from people buying stickers (seriously) and in-app purchases of video games.

What’s interesting is that the company’s self-described “strategic business”, which includes its financial services and e-commerce offerings, only generate a small percentage of its overall revenue.

Last year, for example, LINE’s “strategic business” was responsible for 13 per cent of the company’s total sales.

To be fair, that is partly because many of those services are comparatively new.

LINE’s e-commerce and crypto offerings, for example, are barely a year old, so there hasn’t been much time for them to make money for the company.

Having said that, many of the areas that the firm has expanded into are arguably unproven in their ability to generate solid returns. Taxi services are a good example of this — just look at companies like Bolt and Uber which have never made a profit.
‍

Shares in LINE started trading on the Tokyo Stock Exchange in July 2016. ADRs in the firm were listed on the New York Stock Exchange at the same time.

The firm saw a meteoric rise in its share price, which was at a low of $27.50 in June of last year, after it announced that it would be merging with Yahoo! Japan at the end of 2020.

Yahoo! Japan is controlled primarily by SoftBank Group, a Japanese conglomerate headed up by the famous investor Masayoshi Son.

Masayoshi has been a driving force behind the Yahoo! Japan-LINE merger. He has long said that Japan needs a giant tech company if it wants to challenge firms in China and the US. The merger seems to be a way of achieving this goal.

The deal was given the green light from shareholders in March and should be completed by October.

Business types are fond of talking about “synergies” when it comes to mergers and acquisitions. In layman’s terms that means the strengths of one business can be used to improve the other and costs can be taken out.

Yahoo! Japan is a big player in the local Japanese e-commerce market and, with a large base of users, LINE has a big pool of customers to sell to. That could mean the merger will help the companies sell more stuff and generate more advertising revenue.

What will be interesting is to see whether the company decides to focus on a smaller set of business areas or if it will continue to try and expand into areas like streaming, ride-sharing and financial services.

Whatever does happen, the firm that results from the merger will have to figure out new ways of making money. After all, companies cannot live by stickers alone.

Freetrade is on a mission to get everyone investing. Whether you’re just starting or have loads of experience, you can buy and sell thousands of UK and US stocks, ETFs and investment trusts commission-free via our trading app. Download the Freetrade app today and join over 1M other retail investors.