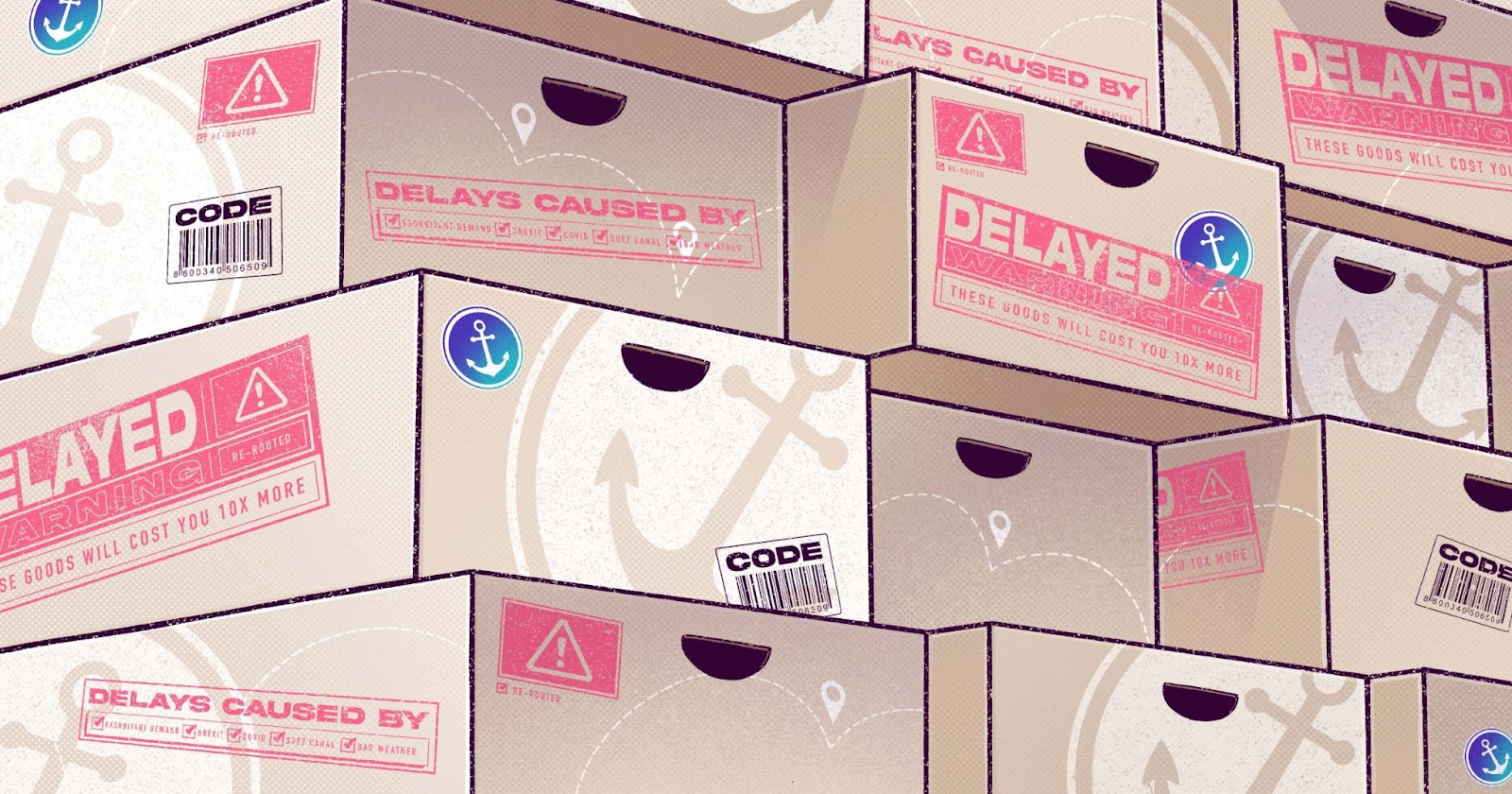 What's the best shipping company to invest in?

It’s 8 April, 2020. You decide it’s about time you buy a bike. Lockdowns are plaguing the world, but a shiny new two-wheeled toy will surely spark some much-needed joy in your life.

You head to Halfords’ website, where you feast your eyes on the perfect Shimano bike. The Japanese cycle manufacturer has tickled your fancy. The price tag isn’t cheap, but when it comes to bikes, whoever said money can’t buy happiness is dead wrong.

You’re plugging in your card details when you notice what must be a glitch. Your bike will be delivered 21 August 2021.

At first, you assume it’s just a mixup. Surely that 2021 should be 2020. But even then, that means you’d be going the entire summer without your new whip! Incredulous, you ring up customer service, hoping for some answers.

But it’s no mistake.

Last year, the average wait time for many Shimano bike parts was 500 days.

This wasn’t just because everyone was on the hunt for a new, healthy pandemic hobby. For the most part, it was a result of global supply chain disruptions from chaos in the shipping industry.

Is it a good time to invest in shipping?

Pre-Covid, the shipping sector kept to itself. It was a fairly invisible industry connecting all corners of the world, which we only came to notice once all hell broke loose.

What was once a finely tuned machine is now in shambles. The issues began with the massive increase in demand for goods, rather than services, when the pandemic started.

As furlough payments came in and the US distributed its stimulus checks, there was much more money circulating, but fewer ways to spend it. This ushered in a heightened demand for products, because there were no restaurants to go to or trips to take.

But Covid lockdowns made it much harder to source and ship the items people wanted.

Everything got thrown off balance, and the average container turnaround time skyrocketed from 60 days to 100.

Why is there a shortage of shipping containers?

There just aren’t enough shipping containers to transport everything we seem to want. And in a sign of its desperation, China’s paying a hefty premium to convince importers to ship back containers, empty. Waiting for them to get filled back up again just isn’t worth it.

This influx of demand handed a ton of pricing powers over to shipping and container companies. And ever since the Ever Given ship blocked the Suez Canal, they’ve only garnered more.

After getting wedged in one of the world’s busiest trade routes in March, it took 108 days to get Ever Given (which is taller than the Eiffel Tower) moving again. The ship was carrying about £650m worth of goods - mostly lemons, bamboo and tofu. Though none of that would have been looking much like food by the time it docked in Rotterdam after four months at sea.

The ship was estimated to have cost £7bn a day in delays to world trade. Over 400 ships were held up in the process.

Why are container ships not being unloaded?

It’s hard to tell just how far Ever Given’s trickle-down effect has gone. Especially because there are tons more variables hitting the industry right now.

Unsurprisingly, Covid’s yet another factor at play here.

In another blow to the industry, Ningo (China’s second-busiest port) has closed up after a staff member tested positive with Covid.

It went from handling 79,000 containers a day to none.

Its most recent closure was off the back of another shutdown in July, when a massive Typhoon forced 330,000 residents to evacuate China’s east coast. Both Ningbo and Shanghai’s ports ceased operations, and cargo ships in port were moved further into the sea.

As of now, there’s no word as to when Ningo will get back to business as usual.

All of this sure does make for the perfect storm.

Are shipping containers a good investment?

Suffice it to say, just about everything that could go wrong in shipping has gone wrong. But it’s turning out to be pretty great news for the industry.

Even once you dole out the cash needed to ship your goods, you’re looking at a massive queue. Time spent waiting at a berth has doubled for most ships. The average wait time in North America went from eight hours in 2019, to 33 by May of this year.

Each and every day of delays just gets tacked on to the prior journey’s delays, making for an ongoing snowball effect.

What is the best shipping company to invest in?

The Textainer Group leases containers to over 400 shipping lines. In its second-quarter results, lease rental income grew by 11% to $187m. Net income swelled by 27% to $75m, suggesting it’s really benefitted from soaring prices for its containers.

Textainer’s utilisation rate (the share of its total carrying capacity occupied by cargo) is now sitting at 99.8%. That’s especially exceptional given Q2 is historically a slower period in the industry.

And clearly, it doesn’t see things slowing down anytime soon. Textainer’s placed $600m worth of orders for new containers.

Another one of the industry’s victors is Danaos.

It’s just the type of shipping company to join forces with Textainer in delivering goods. The US-listed Greek company is one of the biggest containership owners in the world.

What’s more, Danaos has a $1.75bn backlog of charters, extending out for the next 3 to 4 years.

It’s described the market as a situation of short supply, set to last “until at least the end of next year”. But it’s no bother for Danaos, who explains it’s perfectly positioned to leverage this whole new nightmare dynamic.

Who pays the price?

For starters, August and September mark some of the busiest months for shippers. Retailers start getting their back-to-school deliveries and get planning for the holiday season. So on the demand side, it’ll be a while before things ease up.

And as for getting more ships and containers to sea, that’s no overnight process. Even as freight companies order new container ships, these vessels usually take between two to three years to build.

In the short term, costs are getting passed onto the consumer.

Why are bikes so expensive?

On average, the price of that bike you wanted is 22% more than this time last year. That’s of course not all due to shipping delays, but the cycling industry estimates ocean freight is adding a premium to the price tag. The additional cost is somewhere between $15 to $25 for the cycle shop importing the bike.

Maybe not huge by the sounds of it, but one report estimates a $1 hike in the cost for an importer tends to become a $3 increase on the sales floor.

Marin Bikes increased its prices by 8%, explicitly citing freight costs as the culprit.

With Christmas around the corner, it’s only about to get worse. Many ships formerly sailing from China to Europe have now been re-routed, making shipments to goods-hungry America.

It’s highly likely that many won’t be able to make it from the US to China, and back out again by the time December rolls around.

There has been a lot of talk about inflation over the past few months. But these sorts of inflationary pressures can’t be dealt with by central banks.

Hiking interest rates and cutting back bond-buying programmes may help curb borrowing, but it can’t do much to open up global shipping routes again.

What do you think is next for the shipping industry? Let us know in the community forum:

At Freetrade, we think investing should be open to everyone. It shouldn’t be complicated, and it shouldn’t cost the earth. Our investment app makes buying and selling shares simple for beginners and experienced investors and keeps costs low. So download the app and start investing today. Choose from a general investment account and a tax-efficient stocks and shares ISA or SIPP account. Download our iOS stock trading app or if you’re an Android user, download our Android stock trading app to get started investing.