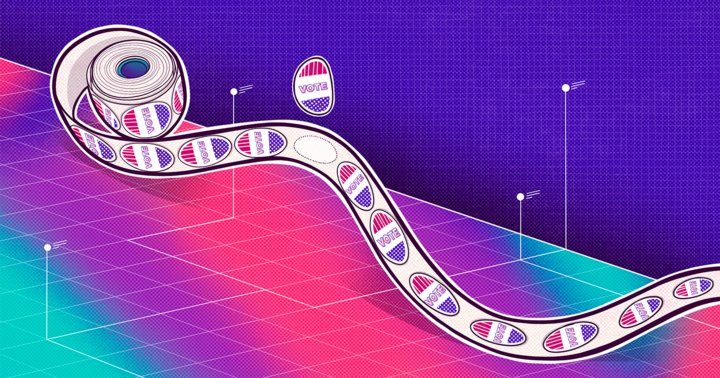 This year felt like someone blended together Dawn of the Dead and Idiocracy and then dunked the resulting mixture in a tub of LSD.

Naturally, the stock market hasn’t been immune to these apocalyptic events.

There was March’s massive crash, the S&P 500’s Lazarus-like recovery and the bizarre spectacle of Hertz shares shooting upwards, despite the car rental firm declaring bankruptcy.

The amazing thing is that, not only are there another three months to go, but there is still so much that can go wrong.

So strap yourselves in and sit back as we look at some of the key events that may move the markets in the months ahead.

Unless one of them dies beforehand, Donald Trump will be facing Joe Biden in November’s US presidential election.

Stock markets tend to exhibit greater volatility when Americans head to the polls.

That’s because investors are trying to figure out who is going to win and, in turn, what their policies will be. The investment decisions they make based on those predictions then influence the stock market.

This isn’t just about who’ll be in the White House next year. Investors also look at who controls the US Senate and House of Representatives.

Whoever has a majority in both these parts of the legislative branch of government is in a better position to push policy. A deadlock, in which one party controls each, makes this harder to do — something that can actually have a moderating effect on the laws being passed, but can also mean no changes can get through at all.

Still, investors will focus most of their attention on who is going to take the White House, with the president setting the tone for major policy decisions.

A Trump presidency may look good to some investors. Until the pandemic struck, the US had record levels of unemployment and an economy that seemed to be functioning well on the back of reduced regulations and lower taxes.

Of course, Trump’s erratic, caps lock-ridden behaviour is something that investors are not keen on. Nor are they big fans of the ongoing trade war with China, something that has regularly caused tremors in the stock market over the past few years.

A Joe Biden presidency promises something of a return to normality, at least when it comes to Twitter politics. The question is whether investors want his accompanying policies.

Biden was a senior figure in an Obama presidency that oversaw a period of sluggish economic growth following the financial crisis just over a decade ago.

At the same time, there are fears that he will have to cater to more radical parts of the Democratic Party, many of whom are calling for policies that are likely to seriously damper the ability of business people to get things done. That includes tighter regulations on tech firms and energy businesses.

If Biden can convince investors that he won’t be supporting these more extreme policies then more investors may warm to him.

Regardless of whether that happens, expect more election-related stock market volatility in the run up to November 3rd.

Brexit is the zombified news story that never dies — even a pandemic couldn’t kill it.

Now it’s making headlines again as the end of the transition period for the UK’s departure from the European Union approaches.

So contentious has this process been that it’s hard to figure out what is actually going to happen after this process is completed next January.

Read some news sites and you’ll get the impression that the UK is about to enter into an irrevocable state of collapse.

Others will tell you that the country is on the cusp of achieving economic growth the likes of which we have never seen.

Sadly, we can’t tell you what’s going to happen. Investors seem to feel the same way. No one knows exactly what is going to take place after January and this ongoing uncertainty is likely to constrain UK stock market growth in the short term.

But more details on the UK’s future relations with the EU are likely to emerge in the months ahead. We can expect more movements in the stock market as those are revealed — for better or worse.

Other developments, particularly trade deals with other countries, that provide some indication as to the UK’s future role in the world and how it will conduct business are also likely to improve investor confidence.

No piece of writing on 2020 stock market volatility would be complete without COVID-19.

The pandemic caused one of the largest stock market crashes in history back in March.

UK stocks still haven’t recovered from this blow but, across the Atlantic, the S&P 500 and NASDAQ 100 indices are back at record highs.

There are a couple of major reasons for this disparity.

The US stock market is far more weighted towards tech companies, many of which have managed to brush off the effects of the pandemic or even benefit from them. By contrast, the UK index of top 100 companies by market cap contains lots of travel, energy and financial firms that have been hit badly by the virus.

Investors may also be feeling that, with interest rates so low, there is no alternative to investing in the stock market. Thus, many of them have continued piling money into the US shares that were already rocketing upwards in value prior to the pandemic.

Looking forward, it does seem like UK stocks are going to be more susceptible to further economic damage that stems from the pandemic. Shares in hospitality, entertainment and travel businesses are likely to be hardest hit — as was illustrated by the massive job losses that look set to result from Cineworld’s decision to temporarily halt operations this week.

In the US, the greater risk may be that investors start to feel that stocks are overvalued. As we wrote last month, the value of Amazon, Apple, Alphabet, Facebook and Microsoft is now greater than the combined GDP of France and the UK.

That’s not to say that these are not good businesses, just that they may not be worth more than the economic output of two of the world’s wealthiest nations.

This is not to mention the long-term economic impact that COVID-19 could have. Investors in the US and the UK are currently hoping for more stimulus packages from the respective governments of both countries.

But in the US, Trump has called off negotiations for such a package and, in the UK, the Conservative Party seems keen to stop borrowing vast sums of cash.

There are certainly good reasons not to do so but many investors fear that, with the pandemic ongoing, a failure to inject more money into the economy could lead to mass bankruptcies, unemployment and a very slow recovery.

None of this bodes well for a stable stock market. It seems that as long as the pandemic is with us, the acid trip that is 2020 will continue indefinitely.

Join the discussion on the community forum.
‍

Make your investments work a little bit harder with one of the UK’s leading commission-free trading apps. Freetrade has transparent charges, no hidden fees and is one of the only brokers to offer fractional shares in the UK. ‍
‍

‍This should not be read as personal investment advice and individual investors should make their own decisions or seek independent advice. This article has not been prepared in accordance with legal requirements designed to promote the independence of investment research and is considered a marketing communication.