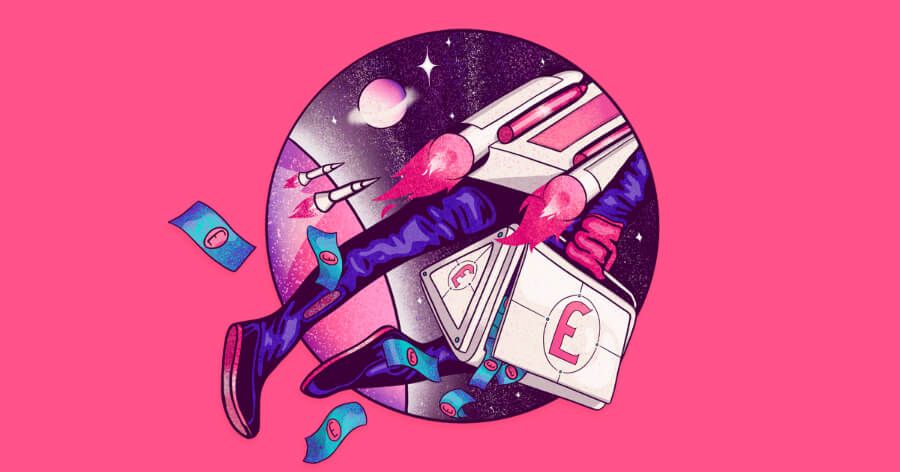 People across the world were glued to their TV screens on Thursday.

They watched as two astronauts, sitting calmly in a rocket’s cockpit, prepared to blast off into space.

Unfortunately, there was no blast off to be had. Bad weather meant that SpaceX, the aerospace company led by Elon Musk, had to postpone its launch until today.

Whatever happens this time around, the SpaceX flight is just the most recent step on a long journey that man has been making to try and go beyond the stratosphere.
‍

A brief history of spaceflight

It may seem like a strange place to start but our attempts to fly into space have their roots in 1930s Germany. Prior to the Nazi’s ascension to power in 1933, members of the German army’s ballistics teams were experimenting with rockets.

Their goal was not to get to space but circumvent restrictions on the artillery weaponry they were allowed to build which had been imposed on them after the First World War.

This research was continued under the Nazis and would lead to the development of the famous V2 bomb, the first manmade projectile to reach space in 1944.

Eager to get ahold of this technology, the Russians and Americans tried to take control of test sites and machinery as they advanced into German territory. Both sides would end up taking back equipment, research documents and, most importantly, the scientists that had worked on the rocket projects.

In fact, and though it may sound like a crazy conspiracy theory, over 1,000 German military scientists were taken to the US from 1946 to 1959 under something known as Operation Paperclip. Many of these people were instrumental in the US getting to the moon. Less widely reported were the Russian efforts to mimic this recruitment drive. Around 7,000 Germans involved in rocket research would end up moving to the USSR after the war.
‍

Like the Germans, the US and USSR were interested in rocket technology because of the potential it had to strengthen their respective militaries. Over time, however, the Space Race - as it would come to be known - took on a more symbolic meaning. Having the first man in space or on the moon was proof that the ideology of one side in the Cold War was superior to the other.

The Soviets would succeed at first by putting a satellite into space in 1957. Four years later they did it again as Soviet cosmonaut Yuri Gagarin became the first man to go to space. The US would bounce back by putting the first man on the moon in 1969.

Until the USSR collapsed in 1991, going into space would nearly always be seen as a governmental endeavour, with a mixture of national prestige and military necessity attached to it.

But things started to change in the 1980s and 1990s as more and more private companies with spaceflight ambitions were launched. Many of them aimed to bring regular people to space. Others had different ambitions. LunaCorp was one of these. Founded in 1989, the now-defunct company tried to build a rover that could land on the moon.
‍

Ticket to the moon

LunaCorp is one of many private spaceflight companies that ultimately shut down. Lots of these companies have been started as vanity projects by wealthy individuals. When these people stop pumping money into those projects, they die.

A bigger problem, however, has been technological. Many private space companies have started out with the goal of taking tourists into space. Clearly this is doable but current technology means it remains extremely expensive.

Still, not every private spaceflight firm has been doomed to failure. Northrup Gruman is arguably the most successful in financial terms.

One of the largest arms companies in the world, it primarily makes military equipment but has branched out into producing spacecraft, rocket engines and satellites. It’s also working on building the James Webb Space Telescope, which is set to replace the Hubble Telescope.
‍

Aside from SpaceX, the most famous private spaceflight company is probably Virgin Galactic. Started by Virgin Group’s rambunctious founder Richard Branson in 2004, the company’s stated goal is to take tourists into space.

Like many projects that Branson has worked on throughout his career, Virgin Galactic’s development has been accompanied by a lot of flowery language and hyperbolic marketing. That can make it difficult to figure out how much progress the business is actually making.

As an example, Branson has said almost every year since 2010 that the company will be able to take tourists into space “within a year.” Those tourists are still waiting and one senior executive at the company noted cautiously in 2014 that "there's a difference between the marketing and the engineering sides of the company.”

That comment came shortly after a tragic accident in which one test pilot died. Since then Virgin Galactic does appear to have made some progress. It has carried out several successful test flights and took one test passenger into space in February 2019.

This flight still managed to garner some controversy.

By US standards, going more than 50 miles into the air constitutes spaceflight. By international standards, you have to travel more than 100 km (62.15 miles) into space for it to really be space.

As the 2019 flight went beyond 50 miles but under 62.15 miles, it constituted spaceflight in the US but not in the rest of the world. Very controversial.
‍

For most of its existence, Virgin Galactic has been a private company. A substantial portion of its initial funding came from the Virgin Group. Abu Dhabi’s sovereign wealth fund also ploughed several hundred million pounds into the company in 2010 and 2011.

But in October 2019, the company went public on the New York Stock Exchange. Interestingly, it did so by merging with another company, Social Capital Hedosophia. This allowed it to bypass some of the hurdles companies have to overcome when listing shares on an exchange.

After going public at a price of $7.85, Virgin Galactic’s shares hit a high of $42.49 before crashing down in mid-February as the coronavirus began to spread across the globe.

How well Virgin Galactic will do in the future is a matter of contention.

Supporters of the company claim it’s in pole position to tap into the future space travel industry and develop other technologies that could speed up regular international travel.

Others have pointed out that the company has consistently failed to deliver on its promises and that much of its technology is actually licensed from other firms. There are also a growing number of competitors in the market. Amazon CEO Jeff Bezos has, for example, been running a spaceflight company - Blue Origin - since 2000.

Lastly, Virgin Galactic flights cost $250,000 a trip. And those trips into space are only likely to last about five minutes. Finding people willing to pay so much money for that experience is definitely possible but could be challenging.
‍

Ultimately many of the problems that Virgin Galactic is facing are also going to exist for any spaceflight company looking to cater to tourists.

Existing technology means that travelling beyond the skies is expensive and difficult to do on any large-scale.

But given that there are some very smart people working on this stuff, it could be the case that this changes over time and technological improvements are made. This is almost certain to be a slow process but, if it does happen, then one day we could be floating around in a low-gravity Under Armour spacesuit aboard a Virgin Galactic flight.

Is it time to sell US tech?