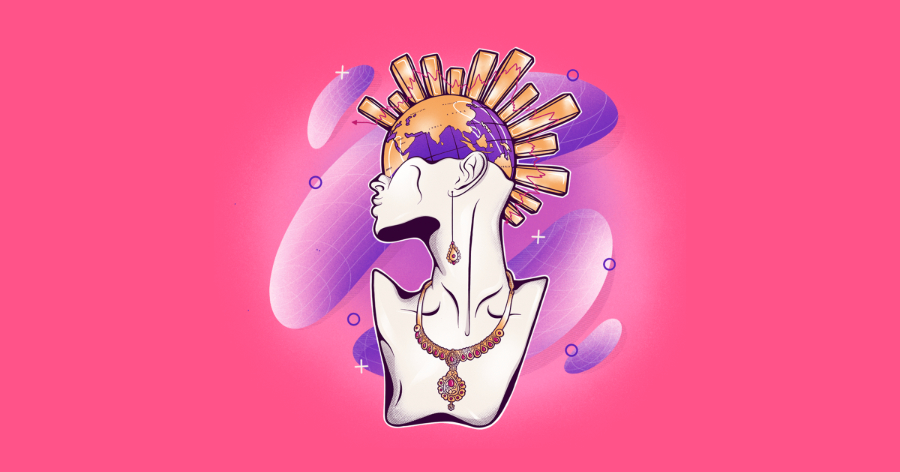 The price of an ounce of gold rose above $2,000 for the first time in history.

Demand for the precious metal has increased massively in 2020, pushing its value up by more than 30 per cent in the process.

The investors responsible for this appear, for the most part, to be responding to the madness that is 2020.

Trade wars, pandemics, US elections, protests, out of control money printers — we really do live in interesting times and, if there’s one thing that risk-averse investors don’t like, it’s interesting times.

Why invest in gold?

Shiny and hard to find, gold has captured the human imagination for thousands of years — it even gets a mention in the Book of Genesis.

We’ve been using gold as a means of exchange for almost as long.

It’s durable and malleable, meaning it won’t rust and you can stamp insignia on to it.

More importantly, it’s rare, which means gold coins are hard to counterfeit. You can’t just walk down the street, find some gold and then use it to make some coins.

This explains why investors still like gold today. It provides them with a store of value that is hard to devalue and immune to much of the chaos in the world.

To put it simply, you can have all of the lockdowns and trade wars you want, a gold bar is still going to be a gold bar.

The price of gold has been rising fairly consistently for almost two years now.

The initial impetus for this appears to have been the ongoing trade war between the US and China.

Any major clash between the pair, which have the two largest economies in the world, is likely to have a huge, wide-ranging impact that will be felt across the globe.

The UK’s recent decision to prevent the Chinese telecoms firm Huawei from working on its 5G network is just one example of this.

All of this makes investors nervous. The range of possible outcomes is huge and many of them could be extremely negative.

This appears to have pushed more people into buying gold as they looked for assets that can weather the storm of uncertainty that the US-China trade war brings with it.

Why are investors buying gold now?

If many investors were nervy before the coronavirus hit, they are in panic mode now.

Of more immediate concern is the economic impact that COVID-19 has had.

In the US, gross domestic product (GDP) shrunk by 33 per cent in the most recent quarter when compared to 2019. This is a level of decline that the country last saw during World War II.

At the same time, governments across the world have printed an eye-watering $20 trillion dollars and pumped it into the global economy.

There is a good chance that this huge influx of cash will lead to inflation.

Buying gold is a way for investors to protect themselves against these different threats.

Unlike many businesses, gold won’t go bankrupt or lose customers if there’s another lockdown. And if printing money en masse does lead to inflation, it won’t be affected by that either (unless governments can figure out a way to print gold too).

On the other hand, gold is not a productive asset. That means people buy it because they think someone will be willing to pay more for it tomorrow. It doesn’t generate value by itself, such as dividends or rent income.

Will the price of gold continue to rise?

As long as there are investors that want to move funds into gold because of political and economic fears, there’s a chance that gold will continue to rise in price.

The problem is that lots of hype and spikes in asset prices can lead to speculators getting involved. Speculators are generally looking for short term gains and not long-term value.

If this happens then gold could become overvalued, which would lead people to sell off and drive the price down again.

Another point to keep in mind is that gold has seen spikes in value before, followed by big drops.

The precious metal rose in value throughout the late 1970s, hitting a record high of $850 per ounce in 1980. That’s equivalent to $2,717 today when adjusted for inflation.

Whether history will repeat itself in the coming decades is very hard to predict. In 1980, the world was also facing a political and economic uncertainty.

But those problems, though somewhat similar, don’t entirely match with what we’re experiencing today.

At some point, however, they are likely to fall back down, potentially very sharply.  Predicting when that will happen is as difficult as predicting when the economy will start to do well again.

Whatever happens, gold will remain a go-to asset for investors that don’t like uncertainty. It’s always been that way and it probably always will.