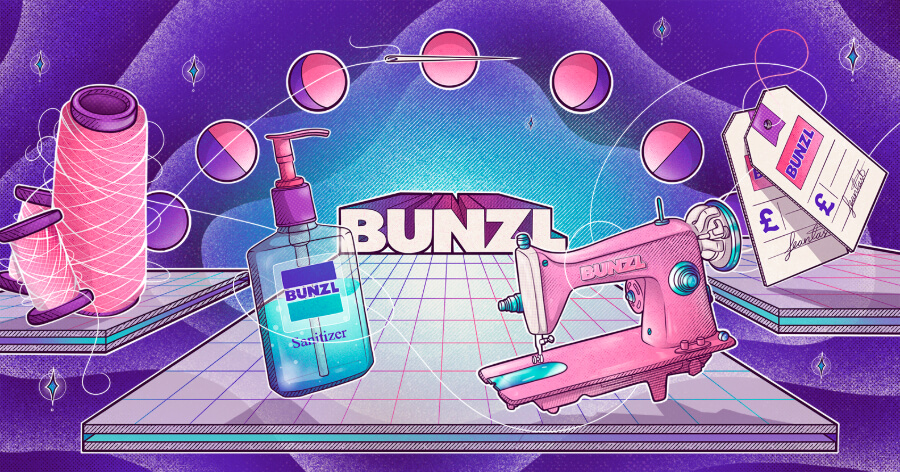 So accustomed are we to many of the products we use in our day-to-day lives, that it can be easy to forget that companies actually have to make and sell them.

The coffee cup you get in the morning, the soap dispenser in your office bathroom or the price tag you see in a shop – all of these things had to be produced somewhere.

One of the companies that makes these mundane yet vital products is Bunzl.

The UK firm made headlines in April when it announced that it would be cancelling its dividend payments to shareholders.

Fast forward to August and the company reported a 6.7 per cent rise in revenues for the first half of the year compared to the same period in 2019. The firm paid an increased interim dividend and reinstated the dividend it had missed in April.

The main reason that Bunzl was able to release such a glowing report was due to a big increase in sales of protective gear or PPE as we’ve heard discussed in the media so much recently.

As you can imagine, the demand for gloves, masks and cleaning equipment spiked dramatically in 2020, with individuals, businesses and governments all eager to make sure their hands are clean and faces covered.

Bunzl was already selling these products prior to the pandemic. A big part of its business is supplying protective equipment and cleaning products to factories, construction sites and offices. When the virus hit, it was able to ramp up production to meet new demand.

In many ways, this encapsulates Bunzl’s entire business model. The company doesn’t do one specific thing. Instead, it provides a huge range of products that other businesses need to operate.

So if you run a chain of supermarkets, there’s a good chance you’ll go to Bunzl for branded plastic bags, custom price tags or specialised food packaging.

The business that Bunzl now operates didn’t appear overnight. In fact, it’s taken a long time for the firm to get to where it is today.

The company was founded in Bratislava in 1854. Today the city is the Slovakian capital but, at the time, it was part of the Austro-Hungarian empire.

In 1883, Bunzl’s three sons — Julius, Ludwig and Max — moved the business to Vienna. Five years later they started producing paper at a factory near to the city.

The roots of the firm’s success started in 1925 when it allowed Boris Aivaz, a Hungarian inventor, to start experimenting with producing cigarette filters at its factory.

The initial response to this was poor because cigarette producers didn’t have a machine that could insert the filter into the cigarette.

This changed in the mid-1930s when a firm in the UK produced such a machine. At the same time, tobacco companies realised that a filter would reduce the amount of tobacco they had to put in the cigarette, saving them money.

Things took a turn for the worse in 1938 when Nazi Germany annexed Austria.

Being Jewish, the Bunzl family decided that it would be wise to leave a country governed by the Nazis and moved to the UK.

There they set up shop in the same business — making paper products.

After the Second World War, the family managed to regain control of their Austrian factory and restarted production .

In the decades after the war, Bunzl focused heavily on selling cigarette filters. These had become increasingly popular in the 1950s, being touted as a preventative measure against the recently-discovered health problems that tobacco causes.

But by the end of the 1970s the market for cigarette filters had peaked and Bunzl had to find new ways of making money.

Throughout the 1980s, the firm bought and sold different businesses as it tried to find its own niche. Some of these mergers and acquisitions — including a brief foray into computers — failed.

Ultimately the company ended up with the hotch potch of businesses that it operates today, supplying different tools, clothing and products to businesses.

The paper business eventually disappeared too.

Bunzl sold off its last holdings in the industry in 2002, bringing to an end a 124 year-old business that had spanned the Austro-Hungarian Empire, two world wars and 35 British prime ministers.

Bunzl first listed on the London Stock Exchange way back in 1957. Its shares started trading at 10 shillings and 7½ pence, which equates to about £9.91 today.

The company became something of an investor favourite as it saw its profits increase continuously over the next decade, from under £1 million to over £5 million — or approximately £87 million in today’s money.

This was primarily driven by the market for filtered cigarettes. Only 11 per cent of UK cigarettes were filtered in 1959. By 1968, more than 70 per cent were.

When that growth tapered off — along with a controversy over Bunzl’s control of the market — the firm started to see its profits decline for the first time.

In more recent history, the firm has gained a reputation for paying out dividends regularly and at a growing rate.

When the company cancelled its dividends in April, it was the first time in 27 years that it had failed to bump up its payment to shareholders.

The reinstatement of those payments, combined with an increase in the interim dividend, seems to have restored investor confidence in the company.

It’s worth remembering, however, that the company’s growth has largely been driven by products needed to combat COVID. Revenues for its other business lines have been hit hard.

If the need for protective equipment and cleaning products dies down and the other business areas, which rely heavily on retail and hospitality sectors, do not pick up, that will be tough for Bunzl.

Still, we are dealing with a firm that has managed to transition from haberdashery and cigarette filters to plastic cutlery and steel-capped boots. If it can survive that, it can probably make it through a pandemic.

Important information
This should not be read as personal investment advice and individual investors should make their own decisions or seek independent advice. This article has not been prepared in accordance with legal requirements designed to promote the independence of investment research and is considered a marketing communication.