Casinos, fentanyl and a housing bubble - oh my! 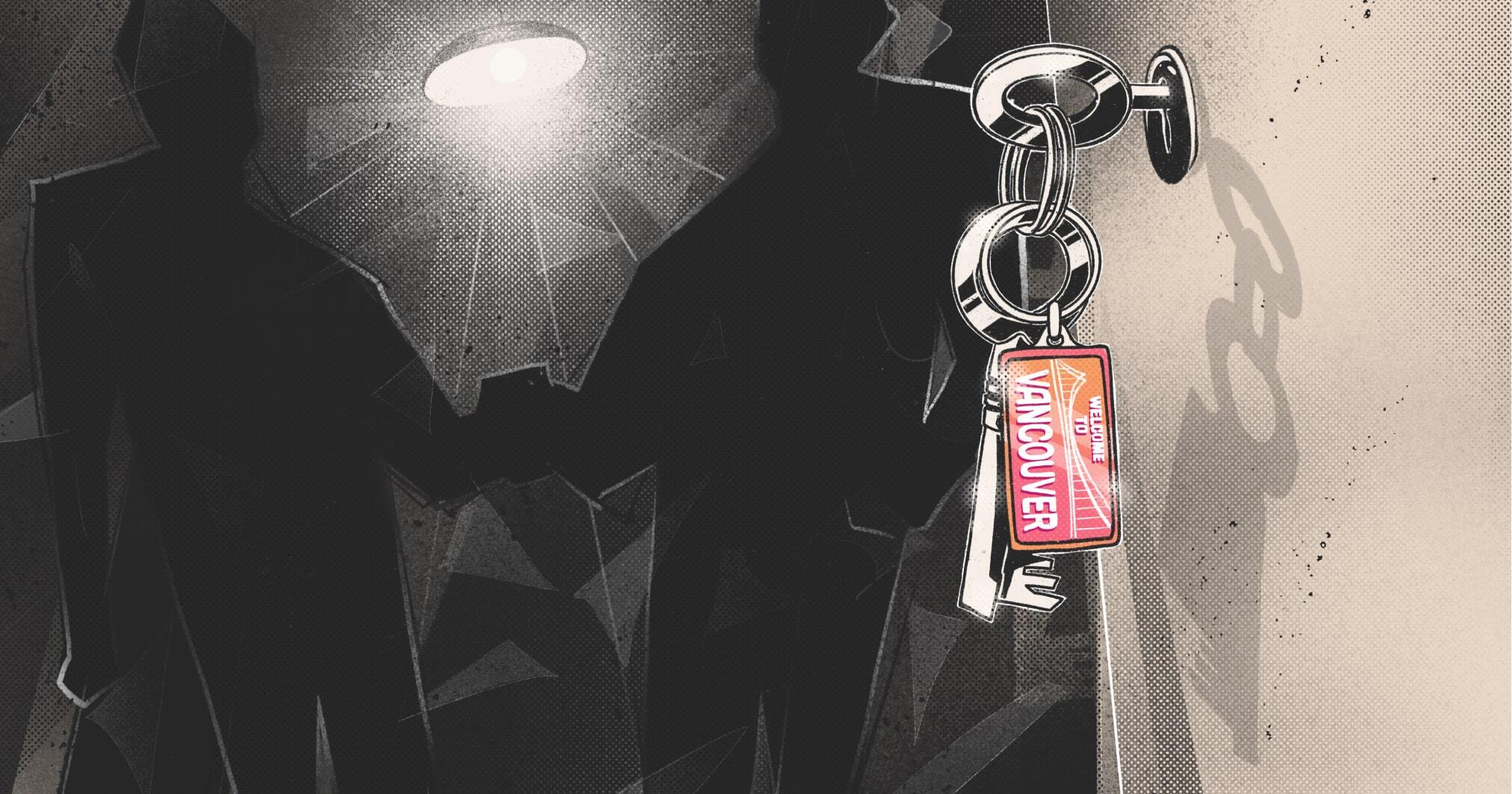 Corruption in Canada has gone amuck.

Turns out, even when investing, ‘too much of a good thing’ still holds true.

If this sounds like a conspiracist’s dream come true, it’s unfortunately not. The ‘Vancouver Model’, as it has been dubbed in the provincial court, is tragically a well-documented truth.

It involves illicit drug proceeds being funnelled through casinos to be wiped clean of their origins, ultimately getting plugged into the Vancouver real estate market.

Over the past four years, the province has conducted a thorough (we’re talking 70,000 pages of evidence) investigation into the merits of rampant cross-industry corruption claims.

In the coming months, the region’s Supreme Court will determine who is to blame and how to punish them.

Hate to burst your bubble

Investigations into the Vancouver Model began after hundreds of allegations emerged from casino whistleblowers. They reported swaths of illegally funded cash were being laundered, in turn fueling Vancouver’s ever-expanding real estate sector.

The Model really took off in 2017, when mainland China’s authorities decided to cap overseas transactions at $7,600 for local citizens. Any value in excess of that threshold has to be reported to Chinese authorities, alongside a pledge that the money wouldn’t buy overseas property, securities or life insurance.

The intention was to curb capital flight out of China, so that investment would stay in the country. It hasn’t worked out that way.

Instead, the capital has just gone underground.

Prior to the cross-border transaction rules, international investment properties were a huge staple of Chinese outward investment. In 2007, the country’s outward real estate investments were around $1bn. But by 2016, it hit $33bn annually - and that was in legitimate transactions.

With such heaving demand, the restrictions didn’t halt activity, they just prompted the search for loopholes.

That’s where one of the world’s largest transnational crime rings stepped in. The Triads are an ultra-sophisticated money laundering ring originating in China with outposts across the globe.

The gang’s highly-documented history dates back to the 17th century. Then in 1949, the secret society began its foray into an existence largely funded by drugs and extortion. For the most part, that hasn’t changed.

In 1990, the Triads were said to control 90% of the global heroin market. And that was before the Vancouver Model really kicked into gear.

The Triads do so much more than just control the city’s illicit drug market though. They’ve created an elaborate crime ring that links Chinese underground bankers with Vancouver money lenders.

The rigamarole starts with a Chinese investor deciding they want Vancouver property. But because of the strict limitations on how much Yuan they can legally transfer out of the country, they reach out to a local banker involved in the scheme.

It’s now up to the Chinese banker to get that money to Vancouver so it can purchase the local real estate.

There needs to be a perceived transfer of goods so that the money doesn’t look to be mysteriously disappearing and hopping across the pond. Here’s where the Triads’ control of the Guangdong province’s chemical industry lends a helping hand.

The Chinese banker goes to buy a number of chemicals - most notably, fentanyl - off the Triads. As Canada’s largest port, Vancouver is an ideal location for smuggling products across the sea. And so, the fentanyl is hidden away in enormous container ships which set sail, goods in tow.

Fentanyl is effectively the vessel that transfers Yuan from China to Canadian dollars in Vancouver.

The chemical is an ultra-powerful opioid used as a pain medication. Technically, that makes it a controlled substance. But when used as a recreational drug or combined with other drugs, it’s often linked with deadly overdoses. Think morphine, but between 100 to 150 times more potent.

China’s involvement in soaring fentanyl use across Canada has long been a hot topic in Canadian elections.

Prime Minister Justin Trudeau has insisted China’s working with Canada to “take measures” to tackle the drug’s nefarious flows into the country.

Once the shipment arrives, it’s distributed to on-the-ground syndicate members of the Triads. These gang members purchase the fentanyl, and sell it across the country. Though for the most part, the fentanyl stays put in the province.

In 2016, a public health state of emergency was declared in response to skyrocketing fentanyl overdoses. Two years later, up to 86% of the city’s overdose deaths were attributed to the drug.

Penny for your thoughts

To transform the drug proceeds into seemingly legitimate sources of cash, the Triads work alongside inside connections in British Columbia’s casinos. This is where a number of high-end BC elected officials have been accused of knowingly engaging with the Triads, or at the very least, supporting practices highly conducive to money laundering.

Anything under $10,000 passing through a BC casino doesn’t need to be reported or accounted for by the casino itself. So if a gambler walks in with $9,999 in cash, they can buy some chips, toss one on the roulette table, then walk right out with the cash wiped clean.

At this point, the money is good as gold. It’s sent to a Vancouver banker involved in the scheme, who usually liaises with a lawyer serving as a nominee on behalf of the Chinese investor. The lawyer essentially makes the real estate purchase under their name, but it’s owned by the overseas investor.

Not only does this allow the actual property owner to remain anonymous, it severely complicates the ability to trace capital flows. And so, the instigators behind the Vancouver Model are more or less protected.

But this was no one-way street. For decades, Canada not only just accepted foreign investment in local real estate - they’ve launched campaigns to overtly usher it in.

The country’s Business Immigration Programme (BIP) was created in 1983, offering immigration status in exchange for a minimum $800,000 investment in the country. Between 2002 to 2014, 60,000 investors took part in the scheme and chose Vancouver to settle.

These legitimate investment avenues became so attractive that when China tried to turn the tap off, the demand was just too strong. Canada’s failure to regulate over fears of what would happen to the market is why it sits where it does today.

Slowly but surely, the threads have been unravelling.

Canadian scholars are increasingly conducting reviews of the Vancouver housing market in attempts to prove the origins of the precarious bubble.

Dr German, a former Royal Canadian Mounted Police (RCMP) officer, analysed 92,280 properties in the province. He determined 47% were vacant, and 29% were bought outright with cash. For perspective, Vancouver’s average home sells for $1.2m.

There’s something fishy about those numbers, to say the least. And he highlighted that again and again in his damning 250-page report for the Attorney General.

The total value of these questionably purchased properties exceeded $150bn.

There are massive implications of such vast quantities of real estate left empty. In the past 30 years, Vancouver’s population has soared by 60% to 2.6m. Property listings, however, have hit a 30 year low.

The property and rental shortage have plagued the city for years, and as the market becomes increasingly expensive it becomes more and more attractive.

The Royal Bank of Canada has shown the average Vancouver household would need to spend 64.3% of their income to cover homeownership costs. That’s precisely how the city earned the ever-so-coveted title of ‘second least affordable city to buy a home’.

These reports highlight just how devastating the impact of these investment restrictions have been. There’s little indication that they’ve served their intended purpose either.

With China’s own real estate market unexpected to bounce back this year, the nation’s outward foreign investment will likely continue to grow.

As the country cracks down on money leaving the nation, the push towards corrupt means could grow even greater still. While the province’s ongoing investigation into the Vancouver Model could feasibly lead to criminal charges, it’s not going to put an end to everything at once.

And the most immediate reaction would likely be tapering investment into Vancouver’s real estate market. While the long term result of any ensuing market correction is of course a good thing, a burst property bubble is far from good news for those underneath it.

Vancouverites and foreign investors alike will be hit with a serious blow if real estate valuations crumble.

While The Vancouver Model started out small, with an unlawful transaction here and there, enough blind eyes have transformed it into an absolute catastrophe. The city has had a very hard time saying ‘no thank you’ when it comes to more investment.

But when regulations aren’t enforced and greed takes hold, it takes over. And if investment ceases to achieve its purpose, it will simply pump up something probably best left to simmer. With the verdict pending on the Supreme Court’s investigation, this could very well be how the bubble bursts.