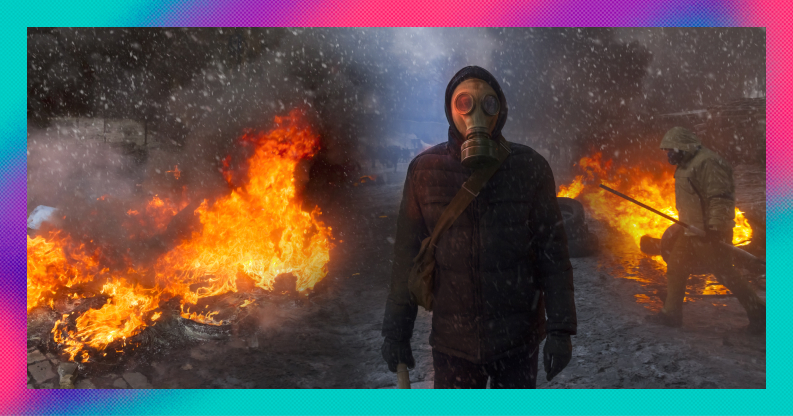 And a tax-efficient account may save you from some major headaches.

In the late 1980s, the journalist Bill Buford spent several years traipsing around the UK and Europe with a bunch of football hooligans trying to figure out what made them behave so badly.

One of the more interesting scenes from his resulting book involves a group of England fans rioting in Italy during the 1990 World Cup.

The crowd is rowdy and there’s some tension in the air but nothing violent is happening. That all changes when one fan steps out and lobs a bottle at the police.

Once it crashes to ground, all hell breaks loose and roaming street battles between the carabinieri and England supporters commence.

Inflation corrodes the value of your money

This may seem like a strange way to start an article about investing but that example of crowd psychology provides some insight into our own behaviours.

Investing seems scary from afar but once you’ve taken the first step, you often realise that perhaps it’s not so frightening after all. And it can be a lot more beneficial to your financial future than lobbing bottles.

In fact, the alternative is arguably scarier than investing itself because of the effects of inflation, a word that’s on everybody’s lips at the moment.

Whether or not currencies will become massively devalued, as many are predicting, is still unclear. But inflation is a real phenomenon and its insidious effects mean the value of what our money can actually buy in the real world falls over time.

The bank ain’t gonna help (at least for now)

Countering the effects of inflation may have been easier in the past when interest rates were higher.

But they have been under 2% in the UK for over a decade now, meaning any money you leave with your bank is slowly losing its value.

That’s not to say you should be dumping all your cash into the stock market. We still need money for bills and, more importantly, emergency expenses.

Cash that isn’t being put towards those things is, however, probably going to be put to better use as an investment than languishing in a savings account. A key part of this is acknowledging the step up in risk though.

The relative stability of cash day to day is why we can use it when we’re out shopping. The trade off is that the stock market can’t provide that short-term stability but it can allow for longer-term returns.

Anyone that does take the plunge and start investing in the stock market will be presented with another conundrum: should you open a general investment account or an individual savings account (ISA)?

Stocks and shares ISAs give you several tax benefits. Although you still have to pay stamp duty when buying London-listed shares, and may be taxed on dividends from companies listed outside the UK, you don’t pay any capital gains tax on share sales and won’t be taxed on any dividend income you receive from UK-listed shares.

What is an ISA?

How to use ISAs for income investing

It may seem like something of a no-brainer to go for this option but then the UK government also offers you various allowances each year that make the decision a bit harder.

For instance, in the current tax year you can earn up to £12,300 from capital gains and have it remain tax free. You can also receive up to £2,000 in dividends and not pay any tax on that amount.

Particularly for new investors, this can make it seem like there is no point in opening an ISA.

Lots of people aren’t going to make a £12,300 capital gain in a year, nor are they going to earn £2,000 from dividends. It’s easy to understand why many people wouldn’t bother with an ISA because of this.

But it’s also a short-term way of thinking that could easily come back to bite you in the future.

Who knows, the asset you hold at the minute could be a world-beater in years to come. The very last thing you need is to have an enormous capital gains tax bill in a few years when you could have hung onto those gains by just using a different account.

Maxing out your allowance

Government allowances don’t carry over from one year to the next, so anything you don’t use in one year can’t be added to your allowance the next.

Even knowing this, what many people think is they can wait until they’ve maxed out their allowance and then sell off and transfer their holdings into an ISA.

This is usually not a good idea. For one thing, you can’t transfer shares from a GIA into an ISA. Your only option is to do something known as a ‘bed and ISA’, where your existing holdings are sold and then repurchased in an ISA.

Doing this means losing money to the market spread and paying stamp duty on any UK shares you buy. If there are any swings in the market when you do it, you may also end up losing more money.

More hazardously, you may not be able to transfer the full amount across. Remember the £12,300 allowance is only the amount you gained, it doesn’t include the amount you invested to make that money in the first place.

ISAs have annual allowances too, and you can only invest £20,000 using one for the current tax year.

Someone who perfectly maxes out their allowance outside of an ISA with a £12,300 gain is very likely to have more than £20,000 to invest in total. As a result, they won’t be able to move across the full amount they made from selling off their holdings.

This means trying to use all of your annual allowance and then switch to an ISA is a massive headache.

And that’s at a minimum. Failing to move across all your holdings leaves you in a position where you could easily end up having money sitting idle and losing value. Alternatively, you may miss out on time in the market and subsequent gains or have to split up a group of stocks you wanted to keep together.

Opening an ISA makes this process much easier as you don’t have to think about it. It may seem annoying to pay for an account in the short-term but, in the long run, you’ll probably be much better off for doing so — financially and mentally.

Keep more of your investment gains with a tax-efficient savings and investment account. With a stocks and shares ISA or Freetrade personal pension, you control where your money is invested while benefiting from tax advantages. To help you get started, we’ve written an ISA explainer and a guide to how SIPP pensions work. Download our iOS trading app or if you’re an Android user, download our Android trading app to get started investing.