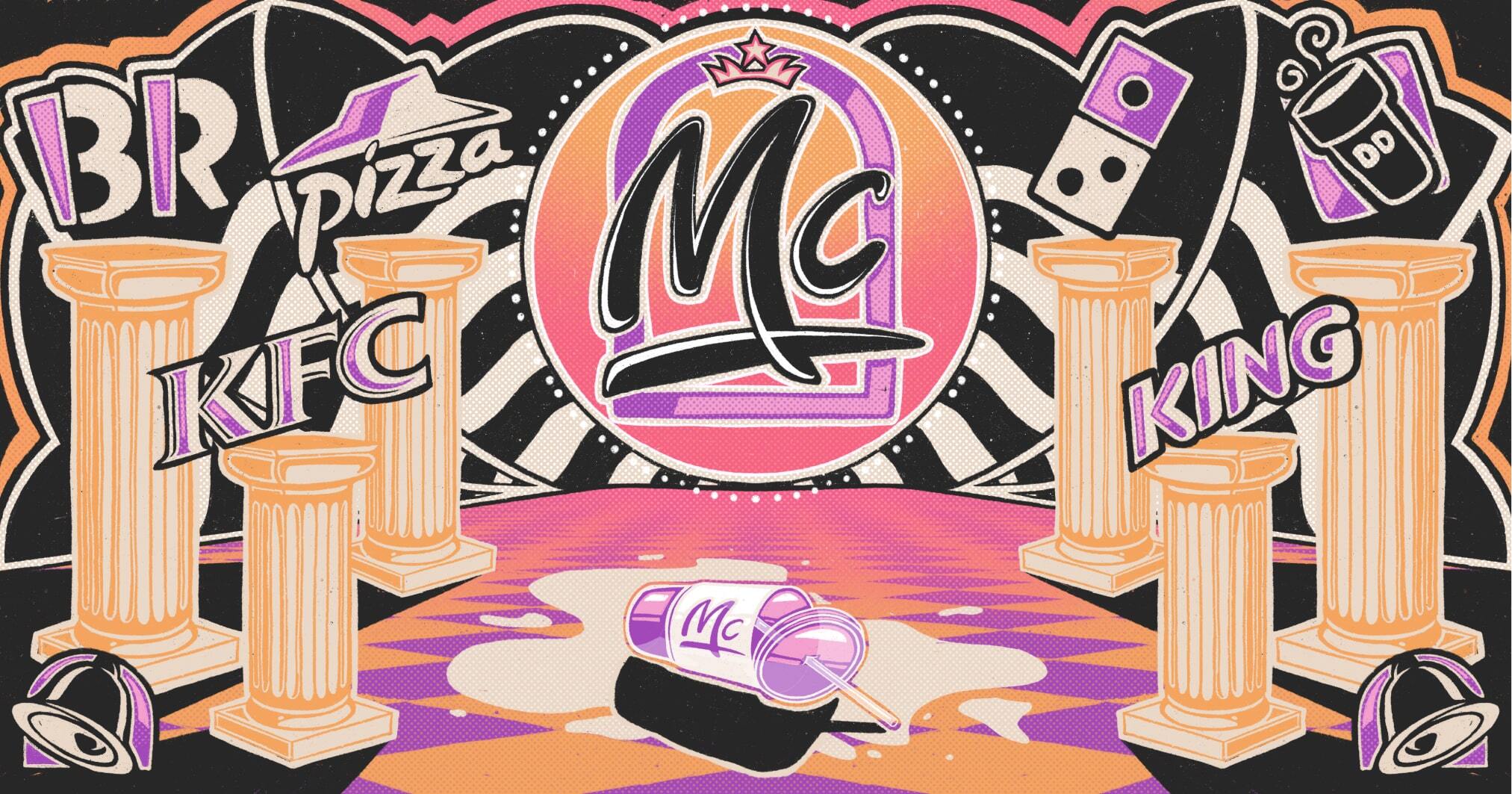 The best path for a smooth ride in otherwise bumpy industries.

If you want a branch on the McDonald’s family tree, you’ll need to pay the price and learn the ropes. As a franchisee, there’s no room for creativity - it’s all about following the rules to a ‘t’.

Franchises are the whip-cracking autocratic parents demanding that you, the franchisee, stay in your lane. All the while, you’ll need to cough up those annual $40,000 franchise fees and 4% of your profits, just to prove your worth.

Once you can demonstrate some competence, the reins might get a bit of slack. You’ve paid your dues, and you’re left to your own devices. That means running your own show with all the risks and some of the rewards that come with.

Frankly, it’s easy to see the relationship as somewhat twisted. Although your franchise might by highly cash generative, you’re forever committed to shelling out a big chunk of whatever you make to your parent company.

For the franchisee, that can be risky business in a year like 2020. But for the franchisor, it means a devout passive income stream. And the investor, it tends to result in a nice and steady bang for your buck.
‍

Do I need to get every stock pick right?

Sign up to Honey, our free weekday investing newsletter

The franchise model lets the franchisor grow tons of new tentacles without having to put swathes of money on the line. They can expand with very little, if any, capital risk.

Using other people’s money to grow has its advantages.

Yum! Brands has had whopping successes with its slew of franchise brands, from KFC to Pizza Hut and Taco Bell. About 95% of the group’s restaurants are completely independent, meaning Yum has a lot of kids to its name, but it’s not dolling out child support any time soon.

Instead, the Yum family of franchisees supports the parent company. Last year, all franchisee contributions (from sales, rent payments and advertising fees) were $3.2bn, or 68% of total revenues. These revenues are practically guaranteed. Only a small percentage of that is variable and dependent on the restaurant’s actual success. For the most part, the money’s as good as gold.

Even in as wacky of a year as 2020, franchise owners had to pay their dues to the head honcho.

So most of the business risk is transferred from franchisor to franchisee. Whether it’s blue skies or storm clouds ahead, they owe the franchisor for rights to the brand. That’s good for the business at large, but terrifying for the people having to deal with a sudden dearth of footfall.

As an investor, if you had a string of hospitality stocks in your portfolio, it may have been a year rife with nail-biting too. But if your investments included franchises in the sector, you were likely much more confident in their ability to wring every last drop of revenue from their devoted franchisees.

Feast your eyes on just how yummy those numbers can be for a franchisor.

If a franchisee is ready to channel their inner colonel and open up a KFC, they need somewhere in the range of $1.4m to $2.8m to start. Then there’s an annual $45,000 to keep the red and white sign up.Oh, and the costs of actually running the business. Chicken doesn’t grow on trees, you know.

Those line items are a simplified example of what a franchisee needs to stomach just to break ground on their own piece of turf. You can bet Yum is licking its chops at those numbers everytime a new application comes in. With 25,000 KFC franchises already under its very tight belt, the firm has a big cash cushion to keep it comfy.

And it’s not just the revenue streams that look good.

Franchises are similar to software in that once the product has been developed, the capital expenditure’s out of the way. The money has been spent and it's all systems go. With the expensive part over and done with, the product just needs to be churned out, assembly-line style.

It’s how Yum maintained a 62% operating margin on those franchises throughout a lockdown-ridden year. Compare that to the average profit margin for a restaurant, which is typically around 4 to 6%.

Increasingly, the firm’s becoming a real estate mogul too. By buying up the land and property beneath its franchise owners and renting it back to them, Yum can rake in even more revenues from those locations. Yet another feature rendering this business model reliable and resilient throughout tumultuous times.

Blowing in the Wynd

Wyndham’s nailed just that. It’s a hotel chain, but before you sound the “Covid loser” airhorn, its franchises are worthy of a closer look.

A few of the names on its mostly American roster include Ramada, Days Inn, Travelodge and La Quinta. Pre-pandemic, the conglomerate of 9,000 hotels was flexing a lofty 80% operating margin from franchise locations.

Similar to Yum, those guaranteed revenues included royalties, mandatory marketing expenses and the annual membership fee for its rewards program.

Wyndham’s not offering up a free lunch for franchisees. If you want the perks of the name, you have to be willing to play the game.

These fees, in addition to each franchisee’s top layer of profits it has to fork over, mean margins can go up to 95% on a good year.

No matter what, franchisees are locked into multiyear contracts which assure the franchisor multiple, consistent revenue streams. In a sense, it's similar to a subscription model.

The franchisees are paying for their Amazon Prime subscription regardless of whether they actually place any orders. If the mood strikes for an overnight delivery of lightbulbs and coffee, well that’s all the better for Amazon’s top line. Either way, they'll get their monthly keep.

With that, even in 2020, Wyndham’s margins were sitting pretty at that baseline 80%.

For context, America’s independent boutique hotels usually have an average margin of 33.8%. Quirky one-of-a-kind hotels with each suite different from the last are fun and everything but, as an investor, if you’re on the hunt for consistent returns able to withstand turbulent years, uniformity can be key.

For Wyndham’s hotel owners, a standardised offer can provide major economies of scale.

That’s why many of its locations are conversions from formerly standalone hotels.

Coordinating, purchasing and maintaining a hotel can be a debacle for an independent business owner at the best of times. So there’s a lot of allure for a $25,000 to $40,000 conversion which only takes a few weeks to complete.

By the time it’s over, you’re not Melvin’s Motel off the highway, you’re a fresh-faced Super 8 eager to strut your double king bed, red-curtained stuff.

The renovation isn’t cheap, but since maintenance and upkeep runs through Wyndham, there are cost advantages from its ability to buy bulk on your behalf.

On one hand, these hotels seem to love it. An initial franchise contract varies from 10 to 20 years in length. These are sticky businesses, and Wyndham has a 94 to 95% retention rate among franchisees. More often than not, those that don’t stick around are actually escorted out of the club for failure to maintain the brand’s standards.

On the other hand, it’s hard to know if the sunk costs simply feel too deep to back out. You’re sinking even more money into the business to strip off the signs and rip out the carpet once that time is up.

Either way, Wyndham has thousands of decade-long, practically nil-churn contracts in the books. Talk about satisfaction guaranteed.

All this goes to show that as an investor, we shouldn’t get too caught up with what’s happening in an industry at large. There are of course insights to be gleaned from changing consumer preferences and demands, but it’s all too easy to miss out on the trees if you’re too focused on the forest.

As of last month, half of surveyed American hotel owners said they were in danger of foreclosure because of the pandemic. 67% said they’d only survive six more months if revenue projections remained the same.

Those are bleak prospects for the sector, but they prove it’s the business model underneath that should capture the bulk of our attention. As a lot of these franchises go to show, consistent, locked-in revenue streams are key to navigating the unforeseeable. And ultimately, the house won’t fall if the bones are good (even if they are mostly chicken).

What are blue-chip stocks?