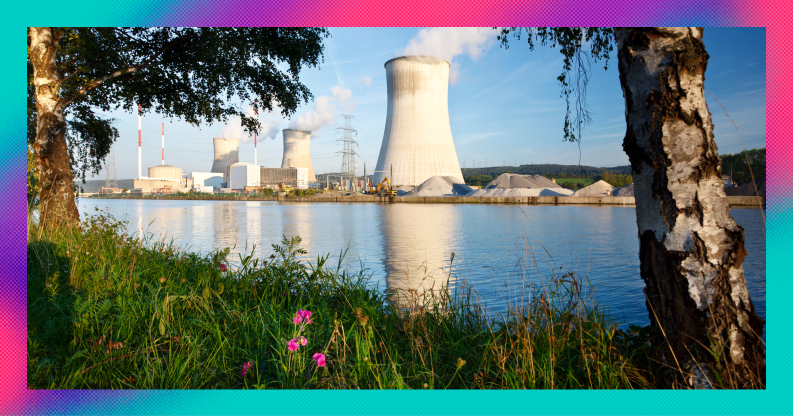 Net-zero’s just what nuclear needs to pull off a rebrand for the ages.

What if the UK’s energy crisis wasn’t really fueled by soaring gas prices, but instead, The Simpsons?

Maybe a stretch. But the US Office of Nuclear Energy once issued a warning of seven things the show got wrong about nuclear a few years back.

The cartoon’s just one example of pop culture perpetuating some of our greatest nuclear fears. Plenty of pervasive myths have disseminated through the media over the years.

But just how warranted is society’s generally frightened view on nuclear power? And could the potential reward of nuclear energy outweigh its risk?

Debate over the UK’s best course of action for achieving net-zero goals has recently pivoted towards uranium-fueled power.

An ELI5 on nuclear’s green merits goes as such: a nuclear power plant runs as a result of nuclear fission, a process undergone when uranium releases a massive amount of heat and radiation energy. The energy then powers a turbine, which in turn generates electricity.

While the mining and refining required to obtain uranium certainly have a decent carbon footprint, once full lifetime emissions are considered, nuclear’s pollution is essentially on par with wind.

But where nuclear manages to get a leg up on wind is through its potential load.

A nuclear plant can operate at 93% capacity, 24 hours a day.

That unpredictability is a major factor in the UK’s current struggle to source and fund energy needed right now. Renewables were supposed to provide 18-20% of the nation’s electricity, but lately, winds aren’t blowing in our favour. Turbines are only providing 11% of the energy entering the UK’s grid.

Of course, none of this is to say nuclear doesn’t come without some huge risks.

Nuclear waste and the radioactive materials resulting from the power creation process have deadly consequences if not stored or disposed of properly.

The radioactivity of waste gradually decays over time. But that can take thousands of years.

High-level waste (known as spent fuel) is made of metal rods, formed by uranium pellets. They’re what generates electricity. And China, Japan, Russia and parts of Europe are now recycling these tubes.

So, waste can actually be used as low-carbon energy once it’s recycled. And this process can neutralise a lot of the concerning radioactivity.

As for the waste which doesn’t get recycled, it’s usually deposited underground, then sealed with a whole lot of clay.

That waste can be immobilised through vitrification - a process of transforming it into solid glass. This prevents it from leaking out of a deposit, a growing concern as storage locations from the Cold War era have begun to leak out.

In 2011, an Associated Press investigation claimed 75% of US nuclear sites had radioactive leakage. Though these leaks appear to have been contained within plant sites, two drinking wells were impacted by the waste.

The investigation found the drinking water standard wasn’t violated by the leakage, but it’s hard to keep those Simpson-esque visuals out of our mind.

Again, it’s not that nuclear isn’t without its faults and concerns. But much of the imagery of radioactive waste is overly dramatic.

Though some of the grave nuclear disasters our planet’s witnessed over the years cannot be understated.

Most recently, Japan’s 2011 earthquake ushered in a nuclear meltdown at its Fukushima plant.

The long term impact of this is a highly contentious topic. 16 workers were injured, but no deaths were reported on the scene.

The World Health Organisation (WHO) claimed there would be no long-term, observable increases in cancer as a result. Japan has only linked one direct exposure death to the incident since, which was a plant worker who died seven years later.

But the disaster did lead to 2,202 related deaths.

These took place in the immediate aftermath of the earthquake, as pandemonium ensued and the country ushered in a massive evacuation.

Lacking access to medical care for those flown out of Fukushima and abhorrent rates of suicide ensued. Japan has since been reckoning with the idea Fukushima’s death toll may have been smaller had citizens stuck around.

Though only time will tell whether that proves to be true.

In the wake of Fukushima, Germany and Japan closed reactors.

A huge glut of uranium followed. With a massive supply overhang to work through, the price of uranium faltered for years after.

Though over the past few months, several uranium related stocks have been on a tear.

The price of uranium is increasing, which is making it much more appealing for producers with the capacity to mine more, to do so. As demand revs back up, they’re turning the machines back on.

It’s tempting to think rampant talk of net-zero mandates and energy shortages have investors getting interested in nuclear again.

After launching in mid-July, the trust bought $240m worth of uranium. That’s about 6m pounds, which theoretically could provide 400m KwH of electricity, or enough electricity to power all of the UK’s homes.

All of that, in the power of Sprott’s hands.

As a result, there are concerns Sprott has cornered the market, effectively taking such a stake in the world’s uranium supplies that it’s been able to single-handedly push up the price.

The price of uranium before Sprott launched its trust was hovering around $30, and it’s since hit $50 earlier this month - though it’s fallen closer to $45 since.

The degree to which Sprott is involved in uranium’s increasing price can’t be known for certain. But either way, nuclear firms are feeling peppy.

And it was all yellow

Case in point, the share price of uranium buyer Yellow Cake has been soaring.

Yellow Cake invests in physical U3O8 (or Triuranium octoxide, a compound of uranium). Investors in Yellow Cake gain exposure to the element’s price, while avoiding risks involved with exploration, development, mining and processing the material.

The firm bought about 5% of the global production of U3O8 in 2016, and now sells it through the spot market.

As demand for uranium ramps up alongside the now-depleting supply, Yellow Cake is thriving.

The firm’s forecasting a supply deficit by 2030, crossing its fingers its “buy and hold” strategy will really pay off then. And in preparing for the shortage, Yellow Cake just increased uranium holdings by 35% to 13.3m pounds.

With no net debt, the firm’s also in a better place to finance future contracts.

Cameco is an alternative way for investors to dip their toe into nuclear power. The Canadian firm explores, buys, mills, and sells the element. Yellow Cake being one of its customers.

Cameco already has plenty of uranium in its reserves. So if demand does indeed continue to grow, it should be well-positioned to sell off to buyers. Especially because getting a mine up and running is an incredibly expensive, time-consuming process, but Cameco’s got that covered.

If the market wants uranium now, buyers like Yellow Cake will go to Cameco to get the goods.

In the first half of the year, Cameco’s revenue declined by 25% to $359m though its net loss improved by 44% to 37m. The group blamed suspended production due to Covid for the dwindling revenues.

At this point, Cameco needs the price of uranium to grow, and long-term contracts to secure its future.

That’s a key takeaway here: as reserve drawdowns continue, demand for uranium will eventually overpower what is currently available.

The question is whether a grand-scale shift to the energy source is taking place. The UK is grappling with the best way to keep the lights on for Britons, while at least acting like it’s taking a step in the right direction towards a net-zero future.

And it does seem the nation’s giving it some thought. The UK’s launching Hinkley Point, a £23bn nuclear power station, set to open in June 2026.

It’s the first plant built in the UK in decades. And while it comes with a pretty eye-watering price tag, plants and reactors get cheap with scale.

The status quo isn’t working. Britons are expected to have another £30 extra on their energy bills every month, and the UK’s had to turn coal plants back on to meet those needs. Yet another three energy providers have gone bust this week.

Say what you will about its tainted past, nuclear’s the most affordable, low-carbon energy option we’ve got.

What do you think about the investment case for nuclear? Let us know on the community forum:

Freetrade is on a mission to get everyone investing. Whether you’re just starting or have loads of experience, you can buy and sell thousands of UK and US stocks, ETFs and investment trusts commission-free via our trading app. Download our iOS trading app or if you’re an Android user, download our Android trading app to get started investing.