When M&A gets embarrassing: how not to make a takeover bid 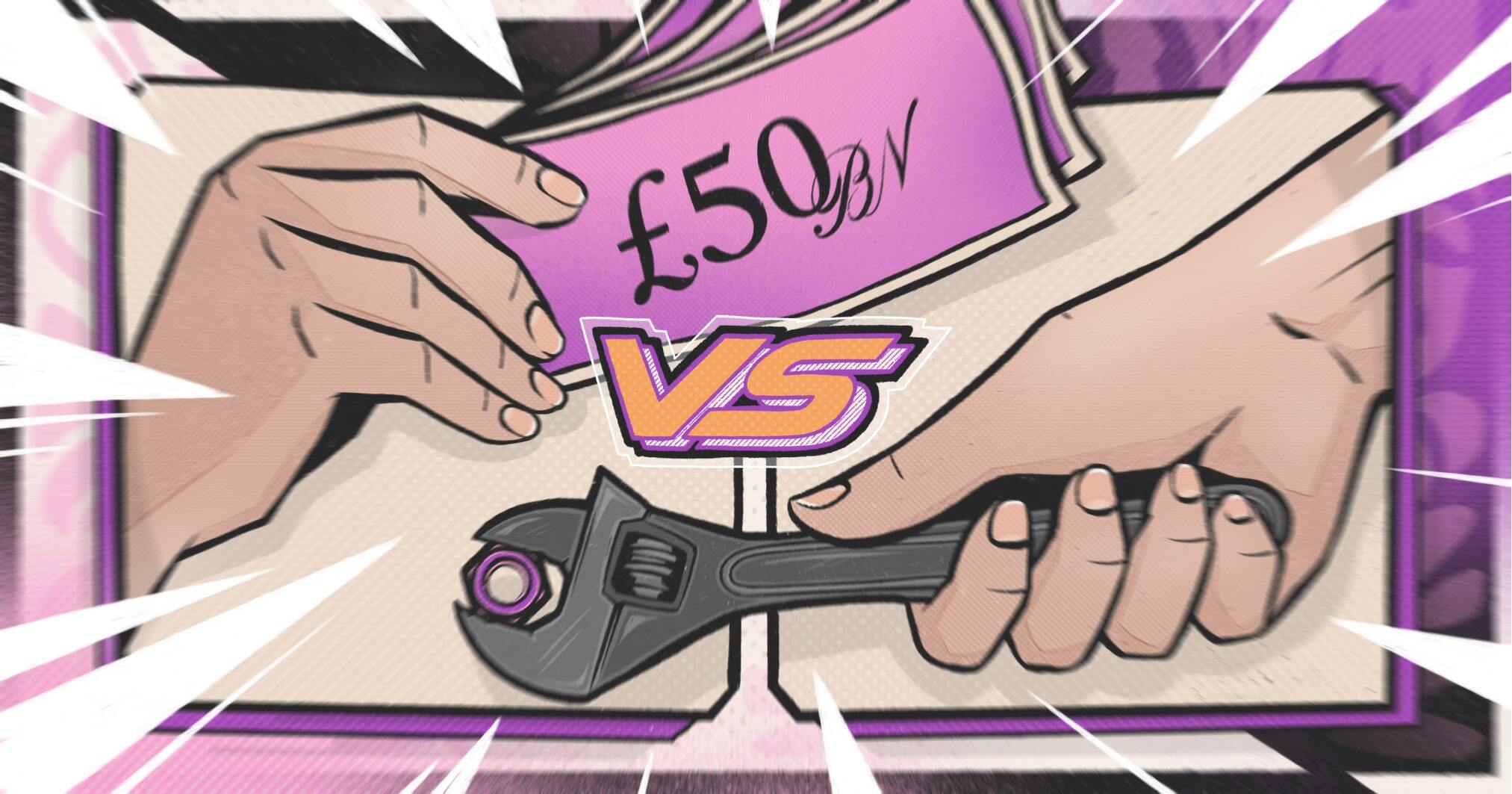 Big corporate deals can make sense, so why do they fail so often?

Unilever just can’t stay out of the news.

First it drew the ire of fund manager Terry Smith over its insistence that Hellmann’s mayo carry a social ‘purpose’.

But any talk of apparent virtue-signalling was quickly overshadowed by the consumer conglomerate’s failed £50bn bid to take GSK’s own consumer segment off their hands.

Tezza was back with a sharpened quill, this time saying the firm had escaped a ‘near death experience’ and urging Unilever to get smarter with their spending.

We could delve into the specifics of the deal and Unilever’s approach but there’s been enough venom poured out on that by now.

Instead, it’s a great jumping-off point to look at whether shelling out huge sums for these big business units actually makes sense in general. Surely it’s preferable to hunker down and develop your own market-leading segment than risk overpaying for one that already exists?

Grab your goggles, we’re diving in.

What’s a CEO for?

Unilever boss Alan Jope must be ruing the day he dialled GSK’s number, cheque book in hand (bank transfer is a much less satisfying visual).

Bids fail all the time - that’s maybe not what investors will remember. What they have started to question though (Terry included) is the strategy that led up to that point.

He didn’t mince his words on that front:

“We believe the Unilever management — or someone else if they don’t want the job — should surely focus on getting the operating performance of the existing business to the level it should be before taking on any more challenges.”

But it brings into sharp focus what investors expect of CEOs and that often boils down to one thing: allocating capital efficiently.

When a business generates a nice cash pile, the boss has four options:

Of course, they could just sit on top of it all like some sort of pinstriped dragon. I refer you to Apple in the 2000s.

More commonly though, if a chief exec’s first choice isn’t to grow the business organically by pumping cash back into its operations, shareholders might get a bit worried.

Companies should be doing their best to grow. And if they are achieving high returns on capital and putting cash back into that, which then achieves its own high rate of return, you essentially become your own compounder.

Firms with high returns on capital employed (ROCE) demonstrate the company’s ability to make more money on the cash they put back into the firm.

ROCE of 15% can get professional investors interested because it shows what the firm is capable of achieving with more money… which, in turn, creates more money. A happy snowball effect.

Warhammer-maker Games Workshop maintained an ROCE of 25% (once store operating leases are accounted for) from 2016 to 2021 according to Bloomberg. That’s not a recommendation to rush out and buy the stock, there are a lot of other measures to consider first - not least your own goals and risk appetite.

But it shows that there are companies that can make good use of the profits they generate.

And, after all, you are effectively subcontracting your money to the CEOs of the companies you invest in. It’s nice to see when they can generate growth themselves.

If those high levels of ROCE aren’t on offer, maybe as a result of a maturing business model with its high octane years behind it, returning cash to shareholders might be an idea.

Dividends present their own pros and cons, which deserve their own Weekend Read. If it’s a two-coffee kind of Saturday, here’s our take on buybacks too.

For the purposes of this exploration though, we’re interested in what we’ve just talked about above, namely organic growth, versus using that cash to buy another company, or inorganic growth.

To buy or not to buy, that is the question

But beyond the front pages there are a lot of questions for the buyers in these equations.

As a shareholder, you’re always hoping a deal (which naturally comes with a premium for the seller) makes strategic sense. At least enough to warrant that cherry on top.

Microsoft has put gaming at the forefront of its AR and VR ambitions for a while. Activision Blizzard seemingly bolsters that capability quicker and cheaper than eventually doing it itself.

Diageo’s acquisition of Casamigos tequila and Aviation gin gave it the exposure to the ‘ultra premium’ spirits market it wanted. It already had Gordon’s, Tanqueray and Don Julio sitting at various levels of perceived quality - the established reputations of these new brands gave it the full set.

This week the firm’s interim results showed its ‘premium plus’ brands contributed 56% of reported net sales and drove 74% of organic net sales growth.

And only yesterday, Diageo completed the acquisition of Casa UM, owner of premium artisanal mezcal, Mezcal Unión. Where brand building is concerned, sometimes shelling out now is worth it, in case you miss the boat by taking the time to create a competitor from scratch.

The point is that if these deals can fill a hole in the overall proposition, they’re worth a look.

Putting a price on it all is a different story.

In that sense, the buyer needs to think about just how easy it will be to fold the new company into existing day-to-day functions and begin to add value as quickly as possible.

Simply, what are the revenue and cost synergies like in streamlining sales forces, distribution channels and logistics? Does one firm have a freight network that would really unlock value for the other?

When Boohoo bought Debenhams for £55m this time last year, the fast fashion firm was careful to only take on the Debenhams in-house brands and ecommerce operations. Why?

It saw the 6m Debenhams beauty shoppers and 1.4m Beauty Club members as a running start to target new customers in the beauty, sports and homewares market for the first time.

Grinding its own beauty audience into gear would have taken longer and, by the looks of it, would have been considerably more expensive too.

But that neat reasoning still needs to be executed and will always come with the complexities of merging business units.

Is it a case of smashing together competing back office operations and forcing them to be friends. And what about culture clash? That’s often ignored but can be a huge factor in whether the new company is a success or not.

When Procter & Gamble announced its intentions to buy Gillette for $57bn in January 2005, one Warren Buffett called it a “dream deal.”

A big part of that optimism was how each could fill in the blanks for the other. P&G had more than 300 consumer brands and was known to target women, while ‘the best a man can get’ made Gillette’s audience fairly clear.

$57bn widened a few eyes at the time but what seemed like fairly straight forward cost synergies softened the edges for a lot of investors.

Gillette would use its distribution capabilities to ship P&G goods to areas where P&G didn't have a strong consumer base (like India, where Unilever was more dominant) and vice versa.

In July 2019, P&G said it had taken an $8bn write-down on Gillette for its fourth quarter.  So let’s get this straight, after 14 years they write down an acquisition, just how patient did they expect shareholders to be?

It blamed the rise in hipster beards and disruption from online-first players like Harry’s and Dollar Shave Club. But a big part of the failure to truly unleash massive value creation came from just how difficult it actually is to integrate these large, sprawling companies with various systems and processes.

It’s rarely as easy as ‘plug and play’ unless that’s what your overall company strategy revolves around.

Bath-based magazine publisher Future is a good example here. It has become an acquisition machine over the past few years.

Last year it spent over $400m snapping up popular titles like FourFourTwo and TechRadar, adding them into the existing tech infrastructure and widening the company’s overall readership to increase advertising revenues.

Yes, a bigger library gets more eyeballs but coughing up around £600m to buy moustachioed comparison site GoCompare has added an ability to lead readers straight from article to price comparison to sale.

A massive hike in 2021’s operating profit to £115.3m from £50.7m, excluding costs associated with acquisitions, and operating margins of 19% aren’t to be sniffed at.

So far the acquisition trail has been well managed, making sure each new target is brought into the fold and, ultimately, adds value.

We could go on about similar strategies at the likes of Constellation Software, Danaher and medical equipment firm Stryker.

Suffice to say, what the leaders of this model are good at is quick integration, not overpaying at the outset and realising synergies extremely efficiently.

And that’s really what it comes down to. Get that blend right consistently and you can be onto a winner. Get one of those three facets wrong and you risk diluting the whole idea behind the deal in the first place.

It’s something to bear in mind as interest rates rise and organic growth becomes harder to find. When management teams feel pressured to deliver growth towards the end of the business cycle, it can trigger a swathe of bids.

Investors need to be careful of C-suites overpaying in those instances or hoping for cost-savings and complementary skills where there just aren’t any - or at least not to the extent that would warrant a bid.

Vanity projects should also be treated with caution. Does that bid really add value or does it just look shiny on the surface?