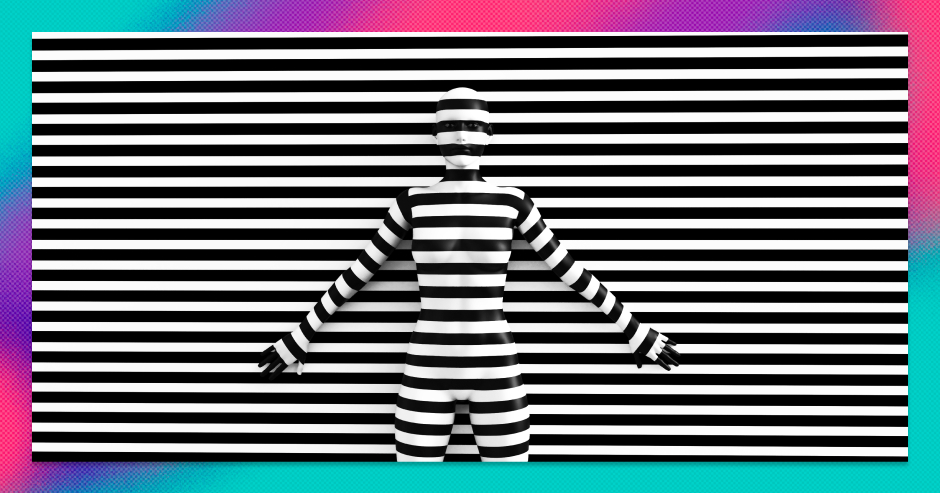 Have you ever stared directly into the sun only to have a chorus line of flickering lights dance in front of your eyes?

That’s a scintillating scotoma. First, it flashes your eyeball, then it obstructs your vision for a moment or two so you can’t see what’s directly ahead.

Aside from being evidence that, as your mum forewarned, direct eye contact with incredibly bright objects is indeed a bad idea, it’s also proof of how easily we’re blinded by what’s staring us straight in the face.

It’s also a physical metaphor for the blind spot that follows us around in everyday life. If you’ve upturned the sofa looking for the keys you’re already holding, you can relate. Much less scintillating, that one.

We overlook our environment and surroundings all the time, failing to notice aspects of our day-to-day we’ve grown so accustomed to. That whole “can’t see the wood from the trees” thing.

Maybe that’s a reason the frequently forgotten insurance industry gets ignored by investors. Mention the sector and expect either silence or a perfectly-timed yawn.

Perhaps it’s insurance’s inherently ubiquitous nature. Quite literally underwriting who we are, what we do, and all we own. Be it our cars, homes, lives or businesses, in many nations, it’s all but a fact of life: if we want protection, we buy an insurance policy.

But there’s a lot more to the industry than meets the (hopefully no longer scintillating) eye.

What’s Buffett got to do with it?

While Warren Buffett’s household name status may be well and secured, the means by which he’s accumulated wealth is less so.

Berkshire’s roots date back to 1839, with an initial focus on textile manufacturing. Buffett initially was an investor, but eventually acquired the firm - converting its cotton spinning division to actuarial tables.

Many of the firm’s biggest investments and top performers are in insurance, the largest of which is GEICO, raking in $35bn of revenue last year.

Buffett actually refers to his purchase of Berkshire as “the dumbest thing” he ever did. He’s said that had he simply invested in insurance rather than acquiring Berkshire, his firm would have been worth “twice as much”.

Just how accurate that valuation is will forever remain unknown. Though, an insurance firm would inherently have twice the revenue streams of a textiles maker.

Sign up to Honey, our free daily investment newsletter

The big split - why conglomerates are breaking up

Whatever floats your boat

When you buy an insurance policy, you pay a premium to the insurance company. That then becomes an available reserve (or a float) for that company to use as it pleases. The float could eventually be used to pay out a claim, if need be.

If the insurance company can keep its float level higher than the claims it pays out, then it’s quids in.

The real magic happens when the company invests that float and turns it into something even bigger. Then, that money can earn interest and income right up until claims are paid out - if they even are. This is the second, usually more lucrative, revenue stream for an insurer.

Which is why when you invest in an insurance firm, it isn’t just about the products they sell, but the investors managing the money.

Although not often perceived this way, insurance firms are fund managers of sorts, and they deserve to pull up a seat to the table.

The property and casualty insurance industry as a whole tends to operate at an underwriting loss. Usually, premiums don’t even cover claims and expenses.

Consider Berkshire’s insurance investments. In the firm’s third quarter, underwriting losses were $783m. Not great, and a hefty 268% bigger loss than last year’s $213m in the red.

GEICO, being its biggest insurance holding, is likely responsible for the bulk of that. It’s the second biggest auto insurer in the US, and was smacked with a huge uptick in claims this year.

Drivers were back on the road after lockdowns, inevitably leading to more accidents, and accordingly, payouts by the firm.

Another hit has been growing demand for used cars. Stimulus-checks gave Americans a skip in their purchasing power step this year.

Many looked to cars as a good place to spend their money - but they were met with a glaring lack of new vehicles on the market. Most turned to used cars instead, leading to a lot more unreliable wheels on the road.

Recovering these underwriting losses is where an insurance firm’s investments prove vital. They can be a lifejacket for firms trying to stay above water.

Case in point: Berkshire’s insurance investment income managed to grow by 13.7% to $1.2bn even while its underwriting loss blew up.

What do most of these investments look like? Auto insurance, relative to life insurance, tends to gravitate toward stocks rather than bonds.

That’s because a life insurance policy likely has a longer time horizon. They tend to have a lower need to pay out in the short term and so, so don't need to cash in investments as quickly. That’s why they’ll usually prefer bond markets, which have a longer investment duration too.

Hopping back to this side of the pond, we can see more evidence that not all insurance companies are made equal.

Legal & General’s assets under management (AUM) make it the second-biggest institutional investment manager in Europe, after BlackRock. In addition to the retail and corporate investment funds L&G offers, it sells life insurance, mortgages, pensions and annuities. It sold off its general insurance division to Allianz in January 2020.

L&G continued to pay a dividend throughout the pandemic, offering up a 6% yield and trading at less than 10x earnings - cheap by most standards but overlooked by huge portions of the market.

More than meets the eye

Unlike GEICO, even with some hefty Covid-related payouts, L&G doubled its underwriting profit to £134m. That’s brought its insurance arm back to 2019’s pre-pandemic profitability levels.

L&G’s asset management division saw profits more than double to £250m for the first half of the year. That’s a hefty 45% more than 2019 revenues as well.

As for its return on equity (ROE), L&G’s is sitting at 21.4%. This accounts for returns from underwriting, interest and investment businesses relative to shareholder equity.

Generally, the higher the better. 15-20% is considered good. Above that? Some might call it great.

Despite that, L&G’s share price is still below its pre-pandemic highs.

In fairness, it’s easy to see how a lot of eyeballs could glaze right over before giving L&G a good look. It’s not born in the sexiest industry, but it’s flaunting what it’s got.

Investors might not be snapping up L&G over fears of further economic fallout from the pandemic. If the economy takes a dip south, L&G’s loans could sour if jobs dry up. Covid isn’t over yet, and the new variant’s hit to markets on Friday goes to show it.

Then there’s Aviva. It has a much more diversified insurance portfolio relative to L&G, with car, life, home, travel and health insurance, to name a few.

Each stream has different needs, with unique investment strategies and horizons to match. Perhaps that lack of synergy is fed into the group’s adjusted operating profit tumbling 8% to £1.1bn in its first half of the year.

Even so, it still declared a 7.4p dividend for the 2021 financial year. It also has a 0.83 price to book ratio, which compares the market value of its shares (the price) to its assets (or, book value). Since Aviva’s is less than 1, the ratio suggests it could be trading at less than it’s worth.

Not just a boring bond

Insurance companies know what they’re doing. Their bread and butter is calculating risk and pricing for it. To figure it out that as accurately as possible, you can bet your bottom dollar they’re consistently looking to the future, making predictions with algorithms and actuaries, not by waving at a crystal ball.

And if the ever-looming global interest rate hike comes, insurance companies may be in a pretty good spot.

They’re some of the biggest bond buyers in the world, and even short-term insurers like GEICO have a fair bit of skin in the bond game.

Plus, higher interest rates generally mean the economy’s growing. And when that’s the case, we tend to buy more homes and cars, ushering in more demand for insurance products in general. Talk about a double whammy.

And given these companies are no stranger to forecasting, there’s no doubt they’ve been preparing for this for some time now. If they play their cards right, they’ll be able to benefit from that future rate increase. As an investor, that means you could as well.

Exuberant tech and electric cars are exciting, and warranted or not, those stocks tend to get glamorised and hyped up. But the real supporting act that keeps these gizmos and gadgets running is insurance.

Even though it’s not bounding up and down to grab your attention, it deserves a cursory glance. At the very least, check your blind spot - who knows what other hidden gems might be hiding there.

Freetrade is on a mission to get everyone investing. Our stock trading app makes it easy to buy and sell a wide range of investments, including stocks, ETFs, investment trusts, REITs, SPACs and even newly launched IPOs. Take a look at the most traded shares on the platform to see what retail investors buy and sell weekly. Download our iOS trading app or if you’re an Android user, download our Android trading app to get started investing.