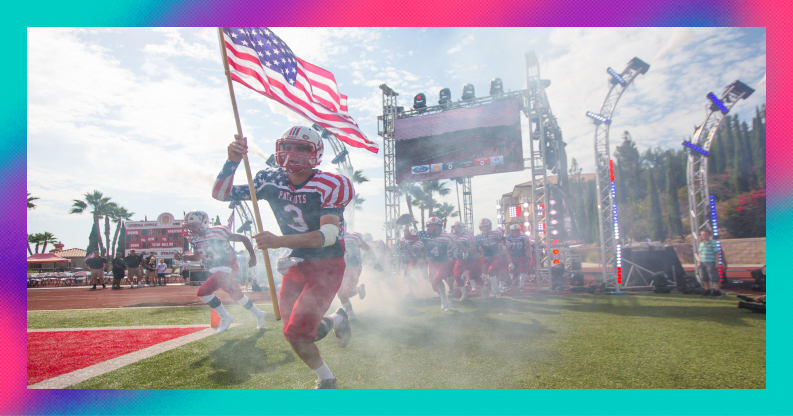 How high streets swapped a Union Jack for a star-spangled banner.

In the first half of the year, over 8,700 chain stores closed up shop on the UK high street. That’s about 50 shops a day.

These weren’t small, independent businesses, but long-established UK chains. Tons of department stores succumbed to their final, fatal blow, with 120 winding up business for good. Fashion retailers took the brunt of the hit, with 1,063 shutting by the end of June.

Is retail a good investment?

But, as the adage goes, as one door closes, another opens.

Though it’s not going to be UK retailers swooping in to rent out these newly vacated properties.

While rents are looking much more attractive these days (on average 30% cheaper than pre-pandemic rates for those renewing), it won’t be local businesses taking advantage.

Rather, American retailers are stepping in, sporting their finest lycra leggings and ultra-ergonomic trainers.

What happened to the UK high street?

Lululemon and Nike are here, and they’re ushering Ted Baker and Topshop out.

One reason so many UK retailers suffered a pandemic-induced demise was a failure to adjust offerings in alignment with changing consumer demand.

Appetite for suits and formalwear has been on the decline since long before lockdowns. But Covid ushered in the athleisure and sweatsuit shift at a frenzied pace.

Is Lululemon a good stock to invest in?

In its first-quarter of the year, US-listed Lululemon saw sales soar by 88% to $1.2bn.

Although we’re gradually returning to business as usual, our attire is not. Comfortable, multi-functional apparel is here to stay. And unfortunately for many of the UK’s classic high street retailers, they have realised it all too late.

Case in point, Ted Baker, which has floundered due to its lacklustre and uninspired ranges. Its workplace and dinner party attire took an obvious hit during lockdowns, but even as functions resume and we return to offices, its sales aren’t revving up to where they need to be.

Even with such a substantial scale-back of its retail footprint, it seems Ted still hasn’t learnt its lesson.

While the retailer’s website is pushing full-steam ahead with ranges of stuffy suits and workwear, that’s not what the UK market is asking for.

Meanwhile, athleisure leader Lululemon has its finger on the pulse. And it’s pushing for massive international growth - opening between 45-55 stores this year, up from previous guidance of 40-50.

Not all UK retailers are stuck in the past

Not all UK retailers are failing to take note of the change in consumer preference.

Selfridges opened up a Soulcycle spinning class gym outside its Oxford Street location. John Lewis partnered with Peloton to offer its at-home bikes across nine concessions in the UK.

Both Soulcycle and Peloton are some of the largest American players in the country’s fitness scene.

And given neither Selfridges nor John Lewis have much of an association with athletics, it’s a wise way to capitalise on the strengths they lack. They don’t have to undergo a massive strategic overhaul to capitalise on the growing interest for sporty apparel and activities too.

Why does the US invest in the UK?

But this isn’t just about the UK’s retail scene not pivoting fast enough to changing fashion trends. Nor is this limited to the high street experiencing a US takeover.

As we’ve seen throughout the year, tons of UK firms are being acquired by American competitors and private equity firms alike.

In 2021 so far, private equity has made more deals in the UK than any other year.

From supermarkets to pubs to defence firms like Ultra Electronics, the range of industries targeted reaches far and wide. The major reason is likely the UK market is relatively cheaper than that of the US on valuation grounds.

Some of the biggest names on the UK's largest index are not necessarily high-growth industries. Instead, it’s pharma, oil and tobacco - which aren’t necessarily home to the most exciting firms for investors.

All this has led to lower valuations for many UK stocks when measured against hotshot tech peers across the pond. And right now, it seems America’s strategy is to either buy them out or replace them outright.

Selfridges and John Lewis seem to have the right idea. By partnering up with the US-based retailers, they’re poised to benefit from America’s growth in the international retail scene.

It’s a wise way to join forces with the emerging leaders, rather than trying to boot them out.

What do you think about investing in US companies?

Freetrade is on a mission to get everyone investing. Whether you’re just starting out or an experienced investor, you can buy and sell thousands of UK and US stocks, ETFs and investment trusts commission-free on our trading app. Download our iOS stock trading app or if you’re an Android user, download our Android stock trading app to get started investing.

Medtech: the robo-doctor will see you now.

Housing and the Fed’s huffing and puffing