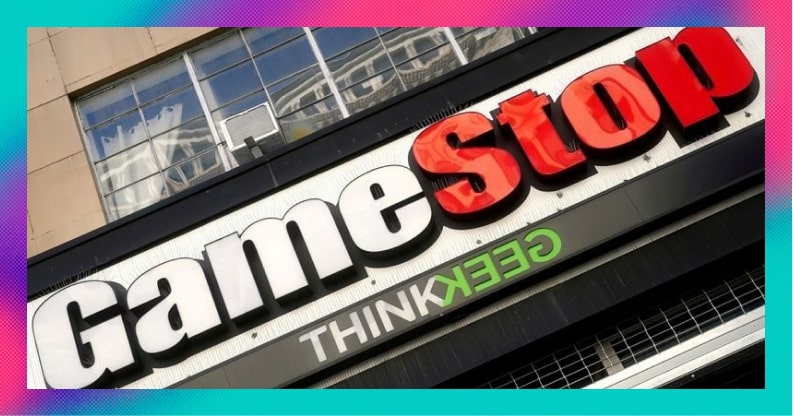 It’s been almost 12 months since we went into lockdown and we’ve become so accustomed to all the bizzarro events that followed, it’s easy to forget just how weird it’s all been.

But the past couple of months really took the biscuit, with the rise of meme stock investing and the scramble to screw over some hedge funds by buying shares in GameStop.

That was reflected in February’s top buys on Freetrade. In the past, we’ve found that most Freetrade customers tend to go for long-term, lower risk investments. That might mean blue-chip  or just some index-tracking ETFs.

Not so in February. The most traded stocks on Freetrade last month were nearly all high risk.

As we go through them, remember that everyone has their own goals and financial circumstances. So even if these investment decisions were good, bad, smart or dumb, think of your own situation before you put money into anything.

And it’s important to call out that this is a wrap-up, not a suggestion or recommendation that you dabble in any of the stocks mentioned.

The video game retailer has stolen the stock market limelight over the past month or so.

Whether it was speculative get-rich-quick bets, an attempt to YOLO short-selling hedge funds into oblivion or some combination of the two, GameStop was the most popular buy on Freetrade in February.

It seemed like all the furore around the stock had died down until last week, when it suddenly shot up again. That seemed to be driven by the company’s chief financial officer, Jim Bell, stepping down.

Or it could be that people just like the stock. Who knows?

Elon Musk’s electric car company has managed to survive the pandemic and remain one of the market’s most sought-after stocks.

There are many true believers who really think the company is going to be a world-beater. That may be the case but its shares are undoubtedly very pricey and are now trading at more than 1,000x earnings.

That may be why investors have sold off heavily in the past month, with shares in Musk’s company down by 20% in February.

Churchill Capital IV (CCIV) is one of many SPACs — special purpose acquisition companies — to have held an IPO this year.

CCIV went public with the intention of merging with….a company. There weren’t really any other details given.

But news did start emerging a few months ago that it was going to acquire Lucid Motors, an electric car company founded by ex-Tesla employees.

That pushed up the share price of CCIV massively but it subsequently crashed after the terms of the acquisition were released and failed to live up to the hype.

We wrote about Argo for our most recent Weekend Read, so if you want to learn more about them then give that a read.

In short, they’re a bitcoin mining company. And because the price of the cryptocurrency has gone up so much during the past three months, people have been piling cash into businesses that have exposure to the asset class.

As Argo has to convert any bitcoin it mines into regular money, it’s sitting on huge currency risk. That has served it well with the price of bitcoin going up. But we all know how volatile the cryptocurrency can be, so it could easily turn around and hurt Argo too.

NIO is regularly touted as being China’s answer to Tesla, which is not a bad analogy to use seeing as they both make snazzy electric vehicles.

It’s a comparison that also seems to be made so as to drum up interest in its stock.

Having said that, China is also a huge market for electric vehicles. Consumers in the country buy about half of all the world’s electric cars every year. Plus NIO is taking a slightly different approach to batteries than Tesla.

So there’s definitely an investment case to be made here, it’s just also true that some people are approaching the stock more speculatively too.

AMC was caught up in the whole GameStop escapade last month, so it’s not too surprising to see it here too.

The cinema operator has been hit hard by the pandemic but seems likely to survive after it secured some major financing.

Shares in the company reached a peak at just under $20. They’re now back at $8.

CIA-backed Palantir has been a favourite since it listed last year. The company makes software for government agencies and started out life supporting military and intelligence units.

Today the group still makes most of its money from government contracts but is trying to branch out into the corporate world.

This is one where it could really go either way. If the group is successful at growing revenues and keeping costs low then it will do well. If not, then it may continue to be another loss-making tech firm.

Like Argo, Riot Blockchain is a cryptocurrency mining business.

There isn’t a huge amount to say here because everything that was applicable to Argo is true here too.

You have the same currency risks and an investment that was driven by a desire to get exposure to bitcoin’s price increase. Again, beware of the volatility!

One of the big stories of the past couple of months has been a surge in the value of pot stocks.

After the US election, when several states voted to decriminalise cannabis, there was a sense that we were on our way to a more pot-friendly future. It also helped that the Financial Conduct Authority gave the green light for cannabis stocks to start trading on the London Stock Exchange last September.

Tilray is well-positioned to take advantage of these trends. The Canadian company is one of the biggest weed growers in the world, for both recreational and pharmaceutical purposes.

But the problem may now be that there’s too much speculation going on and not enough meaningful valuation. Shares in Tilray almost reached $64 in mid-February after starting 2021 at $9. As of today, they’re trading at $24.

Such wild swings are generally a sign of a bit of market madness. That’s not to say that Tilray won’t benefit from more cannabis legalisation, just not as well as a $64 share price suggests it will.

Last on our list is Apple. The tech stalwart, along with several other big Silicon Valley names, has seen its shares fall in value over the past month.

The reason for that seems to be a sense that tech firms were trading at such heady heights, they had to come down.

But then tech firms have regularly defied such expectations, which may be why so many Freetrade customers were happy to buy shares in Apple last month.

Freetrade’s on a mission to get everyone investing. Download our award-winning trading app and join over 1,000,000 investors on their journey to try and grow their savings. Invest in stocks, ETFs, investment trusts and more.